FROM THE HORSE’S MOUTH **

Contributions by our very own Jacob Kuh and Benjamin Nwall in Cameroon
Facts you did not know about Cameroon (Cameroon, officially the Republic of Cameroon on the Gulf of Guinea, is a Central African country of varied terrain and wildlife. Its inland capital, Yaoundé, and its biggest city, the seaport Douala, are transit points to ecotourism sites as well as beach resorts like Kribi – near the Chutes de la Lobé waterfalls, which plunge directly into the sea – and Limbe, home to a wildlife centre.)

1. How are birthdays celebrated?
Birthdays are either celebrated quietly with a cake and a few friends and family members, or a feast is organised and friends, family, and colleagues are invited to rejoice with the person celebrating. Birthday feasts are mostly organised over weekends.

2. When you first meet someone, how do you greet them?
In Cameroon, it is not polite to offer a handshake to a person who is your senior. The junior will say good morning or afternoon and wait for the senior to offer his or her hand. It is not also advisable to shake the hand of a senior person whilst wearing a cap or hat – while your right hand reaches out to the hand being offered, your left hand should be used to remove the hat or cap.

5. What side of the road do people drive on? What do we need to know about driving in Cameroon?
In Cameroon people drive on the right-hand side of the road. Driving is really different from one town to another. In Douala, the commercial capital, driving is very hectic. You must have a valid driving license of course and your car must be in good shape. We also have lots of motorbikes which makes it difficult to drive as they don’t really respect rules and regulations. The roads are not good, even in the major cities such as Douala and Yaounde. It is quite common to be stuck in traffic for anything from two to four hours at any given time.

6. How important is punctuality?
Punctuality is commonly not very important and ‘African Time’ is the order of the day. Most people will generally be 30 minutes to 1 hour late and will routinely blame traffic jams for this.
For official and government appointments, however, you are expected to be punctual.

7. What types of music are popular? Who are some of your most popular musicians?
Makossa and Bikutsi traditionally used to be the popular music forms in Cameroon. The advent of globalisation, however, brought many musical genres to Cameroon. For example hip-hop, R&B, Congolese rhumba and music from Nigeria.
Some musicians presently popular in our country:
Petit Pays – Watch
Manu Dibango – Watch
Richard Bona – Watch
and Charlotte Dipanda – Watch

9. What traditional Festivals are celebrated in your community?
The Batanga community of Kribi celebrates Mayi on the 9 of May every year – Click here.
The Duala community celebrates Ngondo each year on the Wourri river shores – Click here

10. What are your seasons like?
Cameroon has two seasons, a rainy and dry season. In the southern part of the country, the rainy season lasts up to nine months – generally April to November/December. Interestingly the 4th most rainy city in the world, Debudscha, is found in the South West Region of Cameroon: Click here
And the dry season lasts only three months – generally December/January to March.
In the northern part of the country the dry season can last about ten months while the rainy season can last just two months.
11. Tell us an interesting fact about your President?
Paul Barthélemy Biya’a bi Mvondo known as Paul Biya was born on the 13 February 1933. On 6 November 1982 he was selected to be the second president of Cameroon since the country’s Independence after the resignation of the first president Amadou Ahidjo. Mr Biya is one of the longest serving presidents on the African continent and is considered to be a key player in the central Africa region. He made headlines lately when he decided to fight the terrorist group Boko Haram, joining forces with Nigeria Chad and Niger.
He has a young wife with three children.
12. What are Cameroon’s major industries?
Agriculture is the major industry (cocoa and coffee mainly but also vegetables and fruit).
The country also produces oil and gas.
13. How do people spend their free time?
In cities, people spend time in their homes with occasional visits to friends or family and trips to Limbe and Kribi over week-ends during the sunny season. Whilst in the rural areas, people spend time chatting about politics and many other topics over a bottle of white wine or locally made spirit. People like gossiping – we call it kongossa in Cameroon.
14. What do people drink?
What people drink in Cameroon depends on their pockets. The majority go for locally made drinks like white wine made from palm tree (matango) or locally made spirits (odontol, arki). Meanwhile those who can afford it drink beer – some favourites are Guinness, Heineken and Kadji. South African wines are also quite popular.
15. What is a popular local dish?
It is very difficult to pinpoint one popular dish in Cameroon. Each region may have one or two popular dishes. However, Poisson Braisé/Roasted Fish seems to be a dish found nationwide. 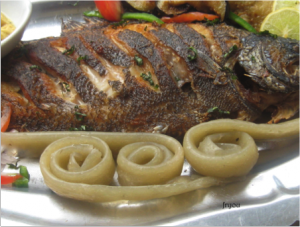 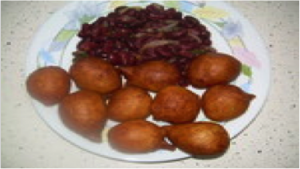 16. What do you pay for? (Euro 1 = XAF 655)
In a restaurant… A cup of coffee – 1,5 euros , a Coca Cola – 2 euros
A 2-Course meal for 2 people – nothing extravagant – 15 euros
At a shop… A loaf of bread – 0.2 euros, a local newspaper – 0.8 euros Milk from 2 to 5 euros
17. Security – in general?
People visiting the far north, north Adamoua and eastern regions of Cameroon should be mindful of their safety. The Boko Haram group and rebel groups from the Central African Republic have made these areas unstable. The rest of Cameroon, however, is generally relatively safe and the main cities, Douala and Yaoundé are very lively with people enjoying going out at night. The surrounding cities like Kribi, Limbe, where people like go to relax and enjoy the sea are also safe.

** Meaning: From the highest authority. From the source.
Origin: In horse racing circles tips on which horse is a likely winner circulate amongst punters. The most trusted authorities are considered to be those in closest touch with the recent form of the horse, that is, stable lads, trainers etc. The notional ‘from the horse’s mouth’ is supposed to indicate one step better than even that inner circle, that is, the horse itself