The Department of Basic Education has published a new directive outlining the return plan for students after a government-mandated break.

South Africa’s public schools began the four-week break from physical teaching from 27 July amid a surge in coronavirus cases.

While some students are due to return before this four-week break concludes, a number of grades have not returned to school since the introduction of restrictions in mid-March.

The latest directive outlines the returns process as follows:

The following learners will return to school on 24 August 2020:

Learners in the following grades or schools will return to school on 31 August 2020:

Students not returning to school

The directive also provides for students that will not be returning to school during this period.

It states that a parent, caregiver or a designated family member may choose not to send a learner to school for reasons that may include:

In these cases, a parent or caregiver are required to fill out an application form and send it to the Head of Department.

The required form, as well as the application process, are outlined in more detail in the gazette below. 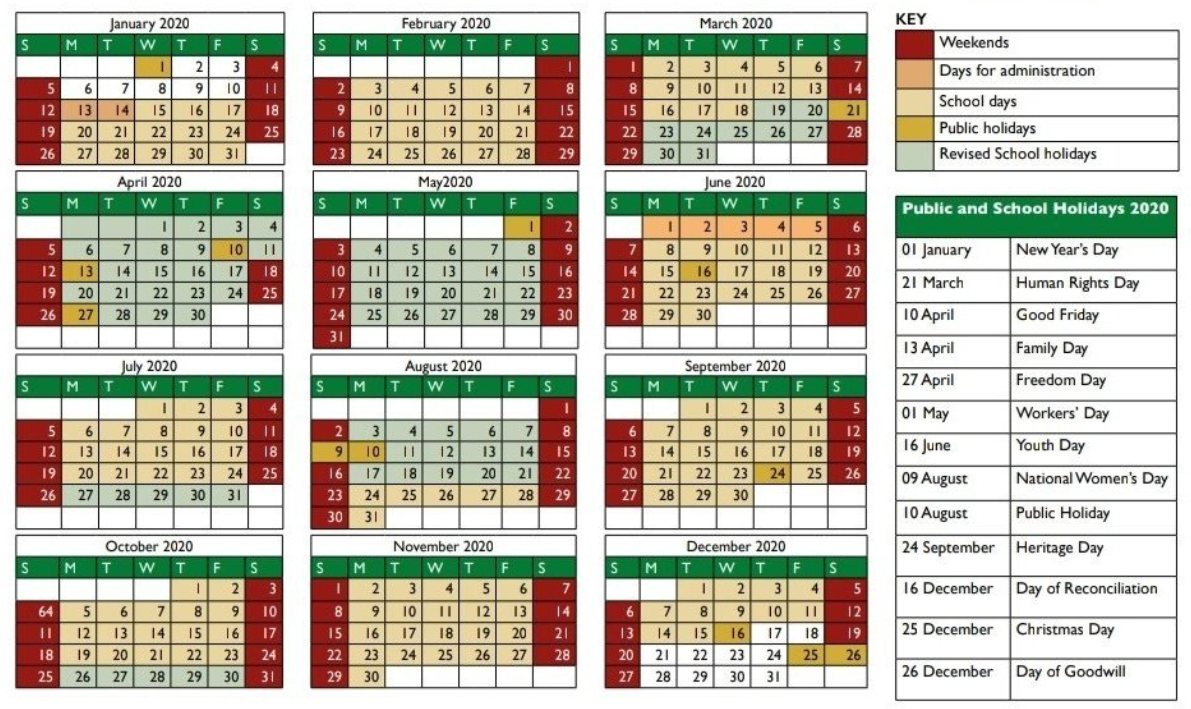 While it does not form part of the official directive, the Department of Basic Education has also published the new calendar for the rest of the 2020 school year, which has been structured so that the academic year won’t push into 2021.

In terms of the new calendar, there are now 163 actual school days for teachers, and 156 for learners.

The department said that the school year will complete on 15 December 2020 for grades R to 11, and will not be carried over into 2021.

A break will be required to separate the third and fourth terms, so a small holiday will take place between 26 and 30 October.

Matric exams will also be concluded by 15 December, the department said, with marking expected to be done by 22 January 2021, and the results released on 23 February 2021.

A few years ago, competition for places in Dubai’s best international schools was so intense that British expat Jemma Schilbach felt she had to get her two children on the waiting lists for her preferred schools before they were even out of nappies.
Work ended up taking the family away from Dubai for a couple of years. When they returned in 2014, they were relieved to discover there were plenty more schools to choose from, but there was another issue: cost.
Both Schilbach and her husband, who’d previously worked in jobs where companies paid for children’s schooling, were now self-employed, and would need to pay for their children’s education themselves.
Schilbach, 43, who now runs expat community website BritishMums.com, enrolled both her children at Foremarke Dubai, which is affiliated with the UK independent school Repton.
She was impressed with the small class sizes and Foremarke’s reputation, but with tuition fees there starting at 65,000 AED ($18,000) a year, it meant the family had to be more careful about spending to ensure they had the money to send their children, aged five and seven, to the school.
“We economise on other costs during the year,” says Schilbach, adding that ordering some household items from the UK and closely watching what the family spends on weekends have helped to save pennies. “In our opinion, the money is better spent on educating our children to a high standard.”

No more bells and whistles

As expatriate contracts change and people accept more flexible benefits, move onto localised employment packages or decide to find their own jobs overseas, finding the money needed for education is a growing challenge for families living abroad. In Dubai, for example, falling oil prices have led to many employers cutting the salaries and benefits packages they are willing to offer their expat staff. It leaves many expats no option but to pay for their children’s schooling themselves, partially or in full.

The cost of education is among the most popular topics of discussion on BritishMums. “It’s an employer’s market,” says Schilbach, who founded the site in 2012. “The old-time expat contracts are few and far between these days.”
This month, in a survey by HSBC involving nearly 8,000 expat parents, 62% said it was more expensive to raise a family overseas than at home. Some 58% mentioned that the cost of childcare, in particular, was more expensive.
A separate survey by Singapore-based advisory service ExpatFinder.com, which covered 98 countries and 707 international schools, found fees rose 3.43% last year compared with the year before.
The most expensive schools for international education were in China – median fees for children aged 11-12 came in at $36,400 a year – followed by Switzerland ($28,300) and Belgium ($27,800), according to the survey. But international education in Britain, Hong Kong, the US, Singapore and Australia also cost more than $20,000 a year. Schools may also charge extra for uniforms, examinations, extra-curricular activities and even books.

“Schooling has become very expensive over the years,” says Sébastien Deschamps, ExpatFinder’s chief executive and founder. “That’s a challenge not only for the expatriate, but also for HR professionals because they still need to attract foreign talent and find ways to keep them.” He advises parents moving abroad to engage a local specialist and thoroughly research full education costs before agreeing benefits with their employer.

The competition has intensified as international schools are pitched more and more at local families looking to give their children an English-language education set to an international curriculum. That demand, along with the soaring fees, has led many expatriate parents to explore options beyond the traditional – and usually expensive – international schools.
Depending on language and local laws some may be able to send their children to state schools within the country where they’re working. Other possibilities include home-schooling, boarding in their home country or taking short-term or commuter deployments so their children don’t have to move at all.
Mostly, however, families are looking towards more affordable schools.

Emma McHugh, a 39-year-old mother of three and Schilbach’s co-founder at BritishMums, is in the process of returning to Dubai from Abu Dhabi. Her children will start at Safa Community School in September, where tuition fees start at 47,000 AED ($12,800).
While her choice wasn’t all about the cost – Emma felt the school had the feel of a typical UK primary with an emphasis on nurturing and care – discounts for siblings, parental referrals and the lower tuition fees came as a “huge bonus,” she says.
This new demand for affordable schooling options has encouraged some countries with sizeable expat communities to tackle the problem head on. In Malaysia, a deliberate government policy to support the development of international schools, setting aside 777.8 million ringgit ($179 million) for 2013-2015 for the purpose, has created more choices for parents whether foreigners or locals.
There are now 170 international schools across the country, from expensive established institutions such as the Mont Kiara International School, which follows a US curriculum, and the non-profit Alice Smith School, to established local chains and newcomers offering British, Canadian and Australian curricula. More are due to open in 2018.
In Singapore, the opening of Invictus Private School in August last year, founded by a tech entrepreneur with fees of about S$15,000 a year ($10,600), has also focused attention on the need for more affordable education for foreigners.

Since 2008, Singapore’s Economic Development Board has held a series of “Request for Interest” exercises for international schools, offering long-term leases on land. In April, it announced a tender to convert a former government secondary school on the west side of the island into an affordable international school.
“Foreign system schools play a part in strengthening Singapore’s position as an attractive global city,” explains Marcus Dass, director of human capital at the Economic Development Board in a statement. “While many existing foreign system schools in Singapore have been delivering high quality international education, there are requests for more affordable and diverse school options.”

Even at schools with lower fees, parents’ expectations remain high.
Many prefer teaching to be led by native English speakers, and International School Consultancy, which tracks the international schools market worldwide, expects demand to intensify for the best and most experienced teachers. With fees generally reflecting teachers’ salaries, and Western-trained, native English speakers in highest demand, schools need to perform a careful balancing act to maintain affordability and attract the best staff.

“The reputation of the international school market is such that schools that severely lack facilities, resources and quality teachers often lose favour and their enrolment declines,” says Richard Gaskell, schools director at ISC Research. “Such schools would [also] struggle to gain any reputable accreditation or quality inspection result, which many parents use to make their selection.”

ISC advises parents to check schools’ accreditation, examination board authorisation and membership of school associations such as the Council of British International School (COBIS), and the Federation of British Schools in Asia (FOBISIA).
For Yvonne McNulty, who’s lived in Singapore for 12 years and is a senior lecturer at Singapore University of Social Sciences specialising in expatriation and HR research, it’s all about “bang for the buck”. McNulty recently moved her children to Dulwich College, which opened in Singapore in 2014, where she feels she gets better value for money than the school where they were previously enrolled.
International schooling is “a hot button issue,” says McNulty. “It’s not just financial, it’s also emotional. There’s a lot of guilt linked to moving abroad so (parents) want to make it up to their children.”