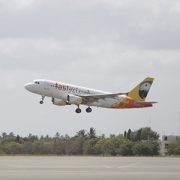 The African Airlines Association (AFRAA) has urged African governments to release about $2 billion in revenue owed to foreign carriers to avoid suspension or shut-down of operations on the continent.

The pan-African body said that the Angolan, Nigerian, Egyptian and Sudanese governments have blocked repatriation of the earnings, which has also contributed to the turbulent market faced by several airlines.

“Nigeria and Egypt have repatriated some funds recently. However, it is critical that airlines should be able to fully repatriate their funds,” AINonline quoted AFRAA Secretary General, Elijah Chingosho said during the organization’s 48th annual general assembly in Victoria Falls in Zimbabwe, on Monday.

Chingosho added that the global fall in oil prices and fall in tourism earnings that has hit several countries on the continent since 2014 is a major reason why the governments failed to repatriate the revenues.

The calls come five months after the International Air Transport Association (IATA) said that the decision by African governments to block funds made it difficult for international airlines to operate on the continent.

IATA added that the move may force some of the airlines to cut flights into the affected countries until the issues are resolved.

Nigeria was estimated to hold about $600 million in airlines’ funds, fin24 reported.

Emirates Airline announced plans to suspend flights to the Nigerian city of Lagos last month, due to high operational costs and foreign currency shortage while Kenya Airways stopped flying to Abuja as part of cutting costs.

In June, Iberia Airlines of Spain and United Airlines of the U.S withdrew flights to Africa’s second biggest economy due to the blocked funds and difficult operating circumstances, Associated Press reported.

Several airlines on the continent are facing tough times, in the wake of a turbulent year where they have continued to record losses in their operations.

In Search of Home …
Scroll to top