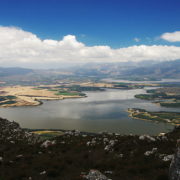 With Day Zero (the day the taps get turned off in drought-stricken Cape Town) still a very real possibility, the City is moving ahead with its water augmentation projects in the hopes of avoiding the day altogether. Although seven of the City of Cape Town’s eight alternative water source projects are running behind schedule, six of them will be feeding water into the system well ahead of the current Day Zero projection.

A major desalination plant (to provide 100 to 150 million liters a day) will be built on a yet to be finalized site in the Cape Town harbor. It is still in the planning stages and is unlikely to be fully operational for at least the next 18 months to two years.

The temporary Zandvliet water recycling project, currently 55% complete, will add 10 million liters per day. The City is currently reassessing the water re-use augmentation program to align it with the licensing conditions of the aquifer water use licences issued by the national Department of Water and Sanitation.

Cape Town residents are advised to stick to the water usage restriction of 50 liters per person, per day, so as to avoid fines, and help the city avoid having to queue for water at 200 collection points if the taps are shut off on Day Zero. Currently, the city is still not meeting its water usage requirements, although usage has been reduced considerably, thanks to combined efforts in residential, commercial, and agricultural areas.