Delays and deliberations by the Department of Home Affairs over instructions issued by the parliamentary portfolio committee on Home Affairs raises questions about Parliament’s ability to conduct oversight of the executive when it comes to managing immigration.

Committee chairperson Paul Chauke expressed frustration at the continued absence of the minister and deputy minster at the committee’s meetings and also wanted know why the Minister of Public Works was not present.

The meeting was mostly about the draft Immigration Bill, but the committee had also called for a report-back from the department on its progress in reopening refugee centres in Port Elizabeth and Cape Town, where it had shut down or cut back on services for immigrants.

This follows rulings by the Supreme Court of Appeal, in cases brought by the Legal Resources Centre, on behalf of the Scalabrini Centre, the Somali Association for South Africa and other civil society groups, that these offices be reopened.

Committee members expressed concern that there appeared to be little urgency in the Department of Home Affairs’ efforts to comply.

In March 2015, the Supreme Court of Appeal ordered Home Affairs to reopen the Port Elizabeth refugee reception centre and gave it until 1 July 2016 to comply. The same court ruled in September 2017 that Home Affairs must reopen the Cape Town reception centre by the end of March 2018. Yet the committee heard that as at August 2018 neither offices were fully operational.

Committee members expressed concern that there appeared to be little urgency in the department’s efforts to comply. One described the response as “insufficient”.

“We are not working in an urgent way as public servants. We must work with urgency. This is an emergency.”

The Department of Public Works, which is responsible for rolling out accommodation for government departments, also came in for a tongue-lashing from the committee. Members said that it “is holding all [government] departments hostage” and that Home Affairs is forced to “beg the Department of Public Works” to provide accommodation even though “we are paying the department a lot of money… They must go and do their job”.

Chairperson Chauke said the committee discussions were about the department’s role in national security and its capacity to manage immigration. He bemoaned the absence of government ministers, leaving communication from the department to Deputy Director-General of Immigration Services Jackson McKay. Chauke observed that McKay was clearly “demoralised” in the face of the enormity of the task, and the lack of resources.

By the end of the four-and-a-half-hour meeting Chauke also sounded somewhat demoralised and frustrated at the lack of progress:

“This is high security we are talking about here,” he said.

He reminded the department that Home Affairs offices were National Key Points, where people and information were supposed to be protected. Yet, in their oversight visits what the committee had seen instead was “chaos”.

The committee resolved on the need for another meeting with Public Works and Home Affairs.

“We need to try to reach an agreement to treat this as a National Key Point department,” he said.

Home Affairs argues that foreigners should in the main be processed as close as possible to the northern borders, where 90% of immigrants usually enter, to ensure that they cannot make their way across the country as far as Port Elizabeth and Cape Town without legally applying for refugee status.

McKay said that as soon as foreign nationals were registered as refugees they should appear on the national population register and could then make use of the normal services of local Home Affairs offices. The feeling was that there should then be no need for refugee centres throughout the country.

However, McKay conceded that the courts had decided that there was a need for these centres and said Home Affairs would be assessing the situation and would raise it with the minister and the deputy minister.

This comment does, however, raise questions: what is still to be discussed once the court has already ruled and Parliament has demanded Home Affairs compliance with the court ruling? Parliament is mandated to oversee the executive. Intra-department discussions with the minister surely come before, not after, the parliamentary committee has reached a decision.

He reminded the committee why the centres had been closed in the first place, referring to reports of abuse of clients, corruption and “the nuisance factor” that had led to court action. In Gauteng refugee reception centres were forced to close their doors because they were found not to be in compliance with local bylaws. The centre in Port Elizabeth was closed after the Department of Labour declared the facilities were not fit for human use.

He made the point that the decision to close these offices was an executive prerogative, and was made after taking into account the centres’ location, financial implications, the plight of clients, available suitable accommodation, effective management and service delivery, among other things.

“These offices have been closing and opening for the past couple of decades,” he said.

A Public Works official confirmed that the keys were handed over to the Port Elizabeth office on 31 May, and he said Home Affairs was busy “buying the chairs”. Security cameras have to be set up and “we are busy with the IT”, the official reported. He said the office will be fully functional by 31 October. This date was decided on after an appeal to the courts by civil society groups, who felt the process had been taking too long.

The office has 22 officials, compared to the 62 employed before the closure. Its staff now include two “status determination officers” and three inspectorate officials, who are responsible for enforcement of the conditions stipulated on refugee permits. This prompted Chauke to ask about the “effectiveness of your office [given] the volume of applications”.

Madumisa reminded the committee of the Treasury’s ceiling on staff appointments and explained that the department had observed a drop in demand for services at the Desmond Tutu and Musina offices. Staff was being redeployed from there. However, moving staff has proved costly. The reopened centre costs about R500,000 a month to run, he said. With a full staff complement, the salary bill alone would amount to about R4-million a year.

In Cape Town, Public Works had been notified to find accommodation after the court ruling. That was in January and a Public works official told the committee that a procurement process had begun after receiving ministerial confirmation.

He said two options were under consideration. One was the use of a state-owned property in Maitland where the plan was to install interim or “park” homes while the idea of having a permanent refugee centre in Cape Town was debated.

The other option is signing a lease agreement with a private company. The department gave the timelines: Adverts would be placed in September and applications closed in October, at which point a decision will be taken. That will be followed by “tenant installation” which was estimated to take about four to six weeks. Home Affairs would then embark on its own installation process, setting up IT systems, putting furniture in place, and so on. The committee heard that this normally takes Home Affairs about eight weeks, prompting a committee member to ask how it could possibly take eight weeks to lay out the furniture.

“If all goes according to plan,” the Public Works official declared, the new refugee centre could open for business at the beginning of April 2019. Using the property in Maitland would be quicker, he said, but the property had only been viewed once and a decision has not yet been reached.

“We need to go through our internal processes for approval,” he said.

At this point the committee chairperson interrupted to ask when the next monthly progress report was due, insisting that the committee receive it, “so that we are able to make a copy and check if you are really complying. Parliament must do its oversight”, he said.

The last office still to be opened is the proposed purpose-built refugee centre in Lebombo. The committee was told permission to proceed with building had received ministerial authorisation, but it was accompanied by an instruction to find a public-private partnership “as there was not enough in the coffers”. This proposal is now with Treasury, which imposes strict compliance on PPPs. The Public Works official said he hoped a tender would be appointed “around 2020”, and if compliance with Treasury requirements was met construction could start in 2021 or 2022.

Chauke also wanted to know if, in the process of installing IT systems, the new offices are complying with the committee’s earlier request to make sure that the systems in different offices are linked and “able to talk to each other”.

Directing this question to McKay, he asked if the details of any person who presented themselves at any Home Affairs office “would be picked up. If you are not doing this, why are you not doing this”?

McKay assured the chairperson that the system was capable of linking all offices in a single database, but said: “That is a system we have not activated due to corruption and control.”

He went on to say Home Affairs “took a decision not to allow that. We have to discuss with our political principals how we deal with that particular issue.”

This again raises questions about the committee’s oversight role. It suggests that the departments of Home Affairs and Public Works may not readily recognise Parliament’s constitutional duty to conduct oversight over the executive or pay sufficient heed to instructions from the committee.

A department official pushed back: “The real reason there is so much pressure on Home Affairs and refugee reception offices is that it takes forever for an asylum seeker’s permit to be dealt with. That is where the logjam is. [It takes about two years to process an asylum application and] that person will have to return to the office about a dozen times in those two years. There are thousands of people in the same situation, that is why you have these long queues and we spend an enormous amount of money trying to meet the demand for an impractical system.

Further frustration was expressed by department officials who reminded the committee that in Cape Town, for example, refugee centres in Maitland and later in Nyanga had to be closed because of complaints about queues of foreigners and allegations of crime and corruption. Naked racism and xenophobia were cited as some of the reasons for such complaints.

A shortage of funds was raised, and the point made that there were only 713 inspectorate officials appointed to manage migration throughout the country.

“There are more employed at OR Tambo airport,” an official said, who added that the corruption among the Home Affairs inspectorate officials “makes us even weaker”.

“There are holes in the bucket,” said one official, referring to illegal immigrants who managed to make their way across the country, accessing grants and places in schools that they are not entitled to. The department appealed for an increase in its budget, saying:

“Capacitate Home Affairs to do its job.”

Mackay said the department’s budget was a serious constraint.

“R7.9-billion is not enough for the department, yet it is at the centre of the government. Treasury should capacitate the department in this regard.”

Additional information on this Home Affairs Committee meeting can be found on the website of the Parliamentary Monitoring Group at https://pmg.org.za/committee-meeting/26934/. 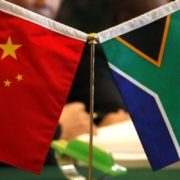 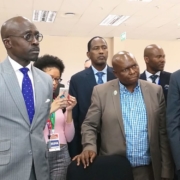 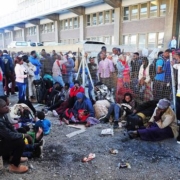 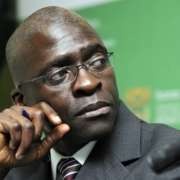