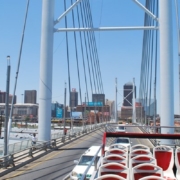 As a tourist guide who conducts tours in Gauteng every day, Johan van Biljon, Chairman of the Institute of Professional Tourist Guides of Southern Africa, says Johannesburg and, to a lesser degree, Pretoria, do not enjoy the perception of being significant tourist cities.

As a result, tourists limit their stays to one, sometimes two nights in Gauteng, and then head off to other attractions in South Africa, such as the Kruger National Park or Cape Town.

Van Biljon says most tourists visit Soweto, as the political history of former South African President, Nelson Mandela, is a major drawcard. “The Apartheid Museum has probably got the greatest reputation and is visited by all. Walking tours of the inner city are also gaining quite a following and are generally well accepted.” He says most major attractions are open seven days a week.

According to Van Biljon, most tourists are surprised when on tour in Johannesburg, as they realise that the city offers a wide range of activities and attractions, more than most expect. Furthermore, it is close to areas such as Welgevonden, which is home to the Big Five.

Van Biljon says there are sometimes gaps in Johannesburg’s offering for foodie lovers, as many restaurants have specific hours. “Try finding a good restaurant open for lunch on a Monday,” he says.

While there are a variety of food markets that take place over the weekends, such as Fourways Farmers Market in Johannesburg, many tours do not accommodatethese weekend schedules and, as a result, tours are conducted during week days. Visitors to the city may read about facilities in Maboneng – such as the Living Room, which pumps over the weekend – but are disappointed on Mondays to find they are closed. Parking in the city is also often an issue for tour groups,

Johannesburg, Van Biljon believes, is not sufficiently accommodating to tourism, and still has a long way to go in terms of development to achieve its maximum potential.

“Johannesburg has great tourism products, but my thoughts are that they are not marketed to full capacity, such as the heritage sites of Constitution Hill in Braamfontein and Liliesleaf in Rivonia, which honour the South African liberation movement,” concludes Van Biljon.

Mareike Pietzsch, Digital Marketing and Communication Specialist at Giltedge says: “We always recommend that clients visiting Johannesburg immerse themselves in the culture of South Africa.”

The Apartheid Museum in Johannesburg, as well as Constitution Hill in Braamfontein and the Nelson Mandela Centre of Memory in Houghton Estate, are a must-do says Pietzsch.

Furthermore, she suggests Liliesleaf Farm in Rivonia, previously a refuge for apartheid struggle leaders who were forced to go underground in 1960. Nowadays, it’s an impressive interactive museum that documents the history of the liberation struggle. Another great spot, according to Pietzsch, is 8115 Vilakazi Street in Soweto, Mandela’s modest home before his arrest.

According to Pietzsch, Maboneng Precinct in east Johannesburg has a lively vibe and travellers can enjoy strolling through the district with its trendy restaurants, art and flagship stores. “Another spot that is great but not as well-known is Alexandra Township, where Nelson Mandela lived for a short time. Take a township tour with Tour2.0 and get to know the heart of the community and eat some traditional South African food.”