Gigaba conducted a tour of the office in Pretoria today where interventions are underway to improve the services provided to asylum seekers.

The office has been a cause of concern for years due to continued allegations of fraud and corruption, as well as human rights violations.

The Department of Home Affairs believes the introduction of automated systems at the Marabastad centre will eradicate long queues and other challenges they present.

Minister Gigaba says ridding the application process of queues decreases the chances of collusion and corruption. 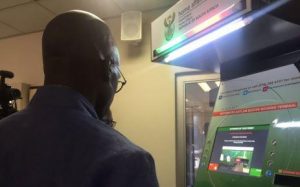 “The proses of making online booking is going to exclude anybody from within the department who could, in the past, assist you to gain access to the centre.”

Last year, lobby group Lawyers for Human Rights released a report which detailed corruption at the centre where asylum seekers were forced to pay as many as four bribes just to have their paperwork finalised.

Now Gigaba says such human rights violations will be drastically decreased through the use of technology.

EWN welcomes all comments that are constructive, contribute to discussions in a meaningful manner and take stories forward.

However, we will NOT condone the following:

We ask that your comments remain relevant to the articles they appear on and do not include general banter or conversation as this dilutes the effectiveness of the comments section.

We strive to make the EWN community a safe and welcoming space for all.

EWN reserves the right to: 1) remove any comments that do not follow the above guidelines; and, 2) ban users who repeatedly infringe the rules.

Should you find any comments upsetting or offensive you can also flag them and we will assess it against our guidelines.

EWN is constantly reviewing its comments policy in order to create an environment conducive to constructive conversations.