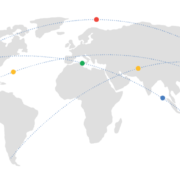 Google will build a new undersea cable from Portugal to South Africa, which promises to bring superfast internet to local shores. The new cable will use state-of-the-art infrastructure based on space-division multiplexing (SDM) technology. SDM transmits information along parallel channels.

This will deliver approximately 20 times more network capacity than the last cable built to South Africa, Google said in a statement. “(It) will be the first subsea cable to incorporate optical switching at the fiber-pair level, rather than the traditional approach of wavelength-level switching.”

This greatly simplifies the allocation of cable capacity, giving Google the flexibility to add and reallocate it in different locations as needed. The new cable, which will be fully funded by Google, is expected to be operational in South Africa by 2021.

A contract to build the cable was signed with Alcatel Submarine Networks at the end of last year. South Africa has access to various undersea cables. Along the eastern Africa coastline, there are the Seacom cable built in 2009 and the SAT-3/SAFE (South Africa Far East cable) which is older. The WACS (West Africa Cable System), supported by MTN, was completed in 2012.

Recently, the Wall Street Journal reported on Facebook’s plans to build an underwater data cable that would encircle Africa. The group wants to lower data costs, and hopes to sign up more users in the process. The project is apparently named Simba, after “The Lion King”. Google’s new cable will be called “Equiano”, named for Olaudah Equiano, a Nigerian-born writer and abolitionist who was enslaved as a boy,

In the second phase of the project, the cable will be extended to Nigeria. Google says it is “looking forward to working with licensed partners to bring Equiano’s capacity to even more countries across the African continent”. While Google has only funded two other undersea cables, it has partnered with others on more than a dozen projects.

For more information from Google, click here. You can view the planned route for Equiano in the first image below, and all of Google’s subsea cable investments in the second image.