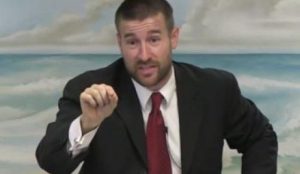 Johannesburg – The Department of Home Affairs on Friday said it was in talks with the Lesbian, gay, bisexual, transgender and intersex (LGBTI) organisations and other stakeholders over the openly homophobic US Pastor Steven Anderson’s planned visit to South Africa.

Anderson, who is widely known for his anti-gay sentiments on social media, is scheduled to preach in Johannesburg on 18 September.
Homophobic United States pastor, Steven Anderson. Photo: Supplied. Credit: SUPPLIED
He reportedly told congregants at his Arizona-based Faithful Word Baptist Church that there are now “50 less paedophiles in this world” following the June 12, massacre at Pulse nightclub in Orlando, Florida that left 49 people dead.

The night club was frequented by gay patrons.
In a video doing the rounds in South Africa Anderson maintains his homophobic stance, saying homosexuals deserved to die.

“I don’t condone violence, but gays should be executed,” Anderson says in the video.

In another video Anderson says SA Home Affairs Minister, Malusi Gigaba, can not legally ban him from entering the country and that he had misled the public by claiming that he had the powers to do so.

In a statement, the Department of Home Affairs said they had noted Anderson’s comments.

The department said an official announcement would be made after finalising the consultations with LGBTI organisations and other stakeholders.

“The basis of our work is on managing comments directed at the LGBTI community and their rights. We are not prepared to expend our energy on dealing with irrational aspersions directed at the Minister,” Home Affairs said.

“If we were to react to every insult directed at the minister or the department, then South Africa will indeed become an empty country.”

The department said it wanted to reaffirm its support for the LGBTI community.

Zim graduates to get permanent SA visas
Scroll to top