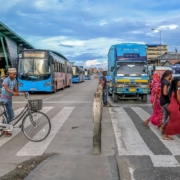 Dusk falls in Dar es Salaam, and for hundreds of thousands of people in this African megacity-to-be the daily chaos and frustration of the journey home begins.

People cram themselves into dalla dalla minibuses, some even climbing through the windows once the entrance is blocked. Others hang out of the doors, but the Kilwa Road heading south towards Mbagala slum is jammed and these diesel-belchers are going nowhere fast.

On Bagamoyo Road to the wealthier areas in the north, solo drivers in blacked-out 4x4s sit stationary too – captive customers for the hawkers who trudge up and down the traffic jams selling charging cables and garish wall clocks, carved wooden animals and plastic skipping ropes. Their metal and glass boxes are expensive and air-conditioned, but they’re still boxes.

So far, so normal for a sprawling megalopolis of 6 million with virtually no public transport and only eight lanes of major road heading to and from the centre.

Dar es Salaam, the de facto capital of Tanzania, is one of the fastest growing cities in Africa. Its population has increased eightfold since 1980 and swells by half a million people every year. The latest UN projections anticipate it will become a megacity within seven years as its population passes 10 million, reaching 13.4 million by 2035. A paper by Daniel Hoornweg for the Global Cities Institute forecasts the city could be home to an incredible 73.7 million people by 2100.

In 2018, four out of five of its people live in single-storey informal settlements on the sprawling fringes, where the journey to and from the centre regularly takes over two hours. It can be longer if rain turns dirt roads to mud.

But Dar es Salaam is pinning its hopes on a solution that could offer a different model for Africa’s megacities, giving them an alternative to a future in thrall to the private car. Unlike many cities on the continent, Dar es Salaam isn’t trying to build a metro. It has chosen a less sexy but cheaper and more achievable route: the bus. 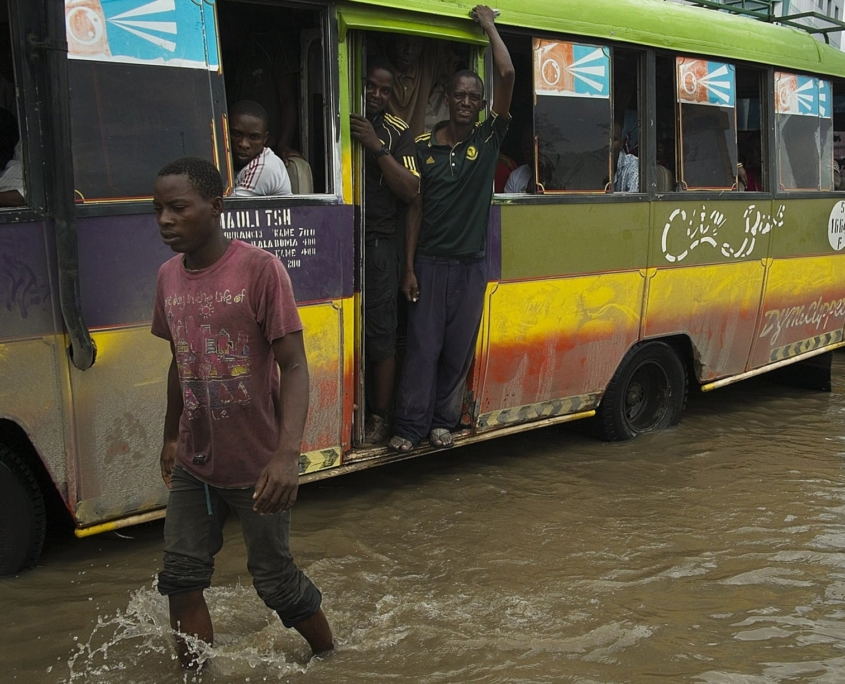 A dalla dalla bus on the flooded Bagamoyo Road.

Even in the middle of the day, traffic frequently grinds to a halt without warning. It is not unusual for cars and minibuses to queue for 20 minutes at a single pinch-point intersection. A lone suburban rail line serves residents in a few areas to the south but is tiny in the context of the wider city. Outside the centre many rely on boda boda motorbike taxis to navigate the narrow side alleys and potholed mud roads that make up much of the metropolis. Their safety record is notorious.

Dar es Salaam’s reliance on four arterial roads – two lanes each way for the most part, one lane in places – is a legacy of the colonial government that planned the city at the start of the 20th century for a population of 35,000. Most of the growth is made up of young people arriving from the countryside to find work, and as the population has exploded Dar es Salaam has grown around those four highways. Nearly all the expansion is happening on the periphery, and nearly all is informal and unplanned.

Until recently, Morogoro Road, the arterial serving the north-west, was one of the most congested and polluted. “It was just dalla dallas,” remembers Ulisses Navarro, a consultant on the city’s original Dart bus rapid transit design in 2005, as we squeeze on to a packed bus for the long trip out towards the edge of the city. “That was the only way for people living out here. It was one of the worst.”

The Dart system boasts bus lanes separated from other traffic, mostly in the middle of the road to reduce stoppages. Ticket payment and control takes place at stations rather than on board, while step-free stations and boarding mean the entire route is accessible to people in wheelchairs or with buggies.

We get on the first bus fine, but for the return journey have to wait for three buses before there is space to board. You should have seen how bad it was before, says Navarro.

The average journey time from the centre to the terminus at Kimara has been slashed from two hours each way to just 45 minutes, according to sustainable transport group the ITDP. That adds up to a saving of around 50 hours a month for the average bus passenger making the full trip. The ITDP awarded the system Africa’s only “gold standard” bus rapid transit (BRT) rating.

“The new buses are much, much better,” says Paulas George, a young IT worker waiting at Manzese station. He takes the bus every day and it has cut his journey time by two-thirds. He says it is not perfect though, complaining drivers sometimes turn off the air conditioning to save fuel.

That is not the only teething problem. A shortage of buses after the main depot flooded during the 2017 rainy season means the system is carrying 200,000 people a day – half the expected capacity. Smartcard readers at station entrances aren’t working either, forcing passengers to buy individual paper tickets for every journey. Each is printed with a scannable QR code, but there are no scanners. Station staff stand by the gates and tear tickets as people enter. Lines are long at peak times.

Morogoro Road was phase I of the BRT project. Phases II and III will install bus lanes along Nyerere Road to the south-west and Kilwa Road to the south. Construction on both routes is due to start imminently. Phase IV, towards Bagamoyo in the north, is in the preliminary design stage.

“Much of the city will have access to a world-class transport system within the space of a few years,” says Chris Kost, the ITDP’s Africa director. All phases are being planned to gold standards and, once complete, a third of city residents will be within a 10-minute walk of the BRT network. 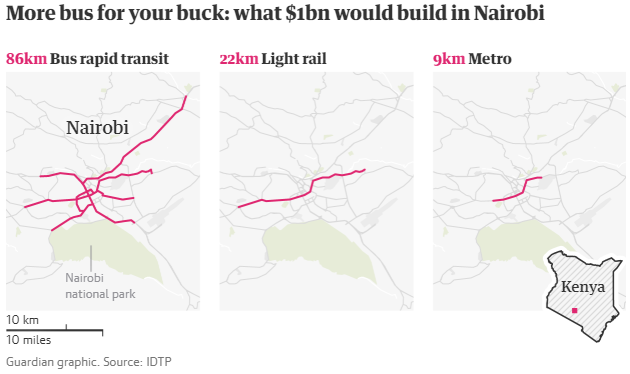 The ITDP bemoans Africa’s obsession with metros. Lagos in Nigeria – the largest city in the world without a functioning mass transit system – has been trying to build a metro since the 1980s. In the latest of many incarnations, the project was supposed to begin operations in 2012 at a cost of $2.4bn (£1.9bn). Six years after the supposed start date, construction is “nowhere near complete”, says Kost.

Abidjan, the economic capital of Ivory Coast, began construction of a metro last year. The French-financed and -built line is projected to carry 500,000 passengers a day at a cost of $1.7bn. Dar es Salaam’s bus system, by contrast, has capacity for 400,000 people and cost less than a 10th of that – about $150m.

Addis Ababa in Ethiopia opened a Chinese-built and -operated light rail line last year at a cost of $475m. Shenzhen Metro Group has a deal to run it for the first five years.

“With a metro, an international firm will often just parachute in its own system,” says Kost. “Bus rapid transit allows existing stakeholders to get involved. That’s what we did in Dar es Salaam and what we’re planning in Nairobi, where the bus bodies will be built in the city and local operators will look after tickets, fare collection and IT. It’s good for the development of the local economy.”

So why are these cities choosing the metro over the bus? Karol Zemek, the editor of Metro Report International, says trains can carry far more passengers than buses, have higher speeds, reduce emissions – and deliver a status boost buses cannot match. “Metro is the top end of mass transit,” he says. “If you want to carry large numbers of people you cannot beat it, and moving large numbers of people around the city is crucial for economic growth.”

Kost, though, sees it more as political expediency. “Because metro systems don’t take up road space and don’t take away from cars then they are politically easier,” he says. “Politicians see it as a big project with no sacrifices. But what if it never gets built? What if what is built is too expensive and so limited in size it leaves the majority of city residents no better off?

“It can be tempting for those in power, but is it really addressing the needs of people of the city? Bus rapid transit has been transformational for Dar es Salaam. For millions of people in African cities, this is their best hope of ever being connected.”

Global Tourism Had Its Highest Growth Since 2010 – Driven by Visits to...
Scroll to top