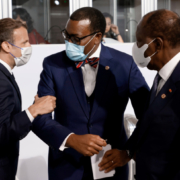 On the 18th of May, several African heads of states and several European leaders held the Paris Summit to discuss and find ways to boost financing in Africa to counter the detrimental economic effects of the coronavirus pandemic and a hampered vaccine rollout.

President Macron reported that the summit had agreed to work towards getting wealthier nations to reallocate (€81 billion) in International Monetary Fund’s (IMF) special drawing rights monetary reserves to African states by October. Furthermore, a debt-servicing freeze was extended to aid developing countries deal with the COVID-19 consequences.

The IMF has confirmed that it will issue $33 billion for the African continent this year in special drawing rights. Africa’s economic growth is projected to grow at just over 3 percent compared to the 6 percent of the world average. The African Development Bank projects that approximately 39 million people could fall into poverty this year, with African states being at risk of debt due to the pandemic.

IMF Chief Kristalina Georgieva stated, “There is no durable exit from the continent’s economic crisis without beating the health crisis.”. As reported in our previous article, many African countries have been affected by India’s COVID-19 crisis, which has slowed down Africa’s vaccine rollout plan. Georgieva states that boosting the vaccination campaign will generate trillions of dollars that will be beneficial to Africa but also wealthier economies.

African countries manufacturing and supplying COVID-19 vaccines will certainly assist many African countries in overcoming the shortage but also in combating the reluctance of being vaccinated with western vaccine shots, said Democratic Republic of Congo and African Union President Felix Tshisekedi.

“I can’t stress enough the need to build the productive economy, that would ensure growth and job creation, as creating jobs for our young people is one of the most important priorities. We would like to create those opportunities for our young talent to stay in the country and build it with us” said Sudanese Prime Minister, Abdalla Hamdok.

The summit coined the “New Deal for Africa” seems to be a good win for not only Africa’s economy but Africa’s COVID-19 vaccine rollout.