Refugees receiving social grants for their children say they are being turned away from the Wynberg offices of the South African Social Security Agency (SASSA), in spite of a directive from the department of Home Affairs. 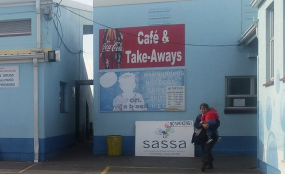 Earlier this month, eight refugees complained to People Against Suffering, Oppression and Poverty (PASSOP) that they had been turned away at Wynberg SASSA offices because they had failed to produce birth certificates for their children which correspond with the Home Affairs ID numbers.

In an official letter to one of the families, SASSA stated: “According to our records, you are currently receiving a social grant. It has come to SASSA’s attention that the identity number of your child/children is not a valid number on the Home Affairs Population Register.”

But Home Affairs Media Liaison Officer Thabo Mokgola told GroundUp: “SASSA must accept all valid identity documents for refugees (including children) and issue grants on that basis. We have engaged with SASSA National Head Office in this regard.”

Congolese refugee Godfroi Lelwa, 49, from Retreat, said until now social grants had been paid by SASSA on the basis of a birth certificate and refugee status document. But now the SASSA officials were demanding ID numbers which were not on his children’s birth certificates, or letters from Home Affairs to prove that the certificates were genuine.

“There is no way our ID numbers can match South Africans’ ID numbers because we are refugees.

He said the social grants were important to supplement the family income from selling goods on Greenmarket Square.

SASSA spokesperson Shivani Wahab did not respond to GroundUp’s emails or return repeated phone calls made to her office since last Friday. From http://allafrica.com/stories/201605190782.html