The South African Reserve Bank’s Prudential Authority has published its annual report for 2019/20, showing how the country’s five biggest banks continue to dominate the sector, despite an increase in competition.

According to the SARB, South Africa’s banking sector is dominated by the five largest banks, which collectively held 89.4% of the total banking sector assets as at 31 March 2020 (March 2019: 90.5%).

This was spurred by an increase in gross loans and advances, derivative financial instruments, and investment and trading securities (mainly government securities and other dated securities), the bank said.

The five largest banks in South Africa based on total assets are:

The graph below shows the biggest banks by assets, to December 2019.

“The banking sector remained profitable during the period under review, despite a decline in the profitability ratios,” it said. However, it noted that the impact from the Covid-19 outbreak would have a major impact on the data for the 2020/21 period.

“The spread of the coronavirus disease 2019 (Covid-19) across the world has had a major impact on economies and financial systems,” said Reserve Bank governor and PA chairman, Lesetja Kganyago.

“South Africa, like many other countries, responded to the crisis by putting in place various fiscal, monetary and regulatory support measures. A number of prudential policy interventions were issued by the PA covering banks and insurers.

“The relief measures for banks included a reduction in the minimum liquidity and capital requirements. The guidance notes covered accounting issues and the payment of dividends and bonuses by banks.”

The authority said that the depth and duration of the economic downturn from the Covid-19 crisis remains uncertain at this stage.

“This pandemic, accompanied by a slowdown in economic activity, is expected to weaken banks’ risk profiles or risk-weighted assets and reduce bank profitability, which would negatively affect the ability of banks to meet their minimum capital requirements.

“Financial market volatility, together with the reaction of other financial institutions, has also placed pressure on market liquidity and the supply of term funding,” it said.

“Despite significant turbulence in financial markets, these measures have helped stabilise markets, enabling banks to continue to operate by extending credit to support their customers,” the group said, adding that the government-guaranteed loan scheme for small businesses will complement the measures already taken by banks to support their customers during these trying times.

South Africa is ‘a marketplace without boundaries’, says PwC, and new niche players are limbering up to compete with the country’s top banks by offering digital, lower-cost financial services.

These are joined by retailers (mobile money from Shoprite Money) and agricultural groups (Afgri, which bought Bank of Athens’ South African operations). Many of those firms would like to grow like Capitec (#44, see profile). It gave South Africa’s well-entrenched major banks a wake-up call by disrupting their long-held oligopoly as a leaner, meaner and faster-growing operation. But it took Capitec, which was launched in 2001, some years to become a major force in the industry.

A recent PwC report says the South African financial services industry is increasingly ‘a marketplace without boundaries’, where banks are being challenged ‘by digital solutions with lower-cost models’. It adds that the market share of the incumbents will likely be squeezed by innovative new entrants unless banks implement strategies ‘to remain relevant in the future banking market landscape’.

FNB has moved successfully to a more digital banking model, while other large banks are trying to follow suit. The new financial services models are not centred around becoming one of ‘big four’, whose services range from retail banking to commercial and investment banking with a plethora of additional services, from mortgage lending to large-scale merger and acquisition capability.

Wessel Badenhorst, an analyst in the financial services sector at 36ONE Asset Management, tells The Africa Report that it is important to keep in mind that most of the challenger banks offer limited product suites: “Most do not offer business banking or offer limited retail products, sometimes because regulatory hurdles prevent them from competing in these markets. TymeDigital, for example, offers only transactional banking, and comments from [insurer] Discovery suggest its bank will have limited lending products, at least initially.” So far, the big banks continue to brush off the threats and have weathered some difficult years.

PwC’s analysis indicates that they grew earnings 5.2% in 2017, although core earnings – operating income minus operating expenses – improved by only 3.6%. Earnings were helped by a 10.6% decline in the second half of the year in bad-debt charges. 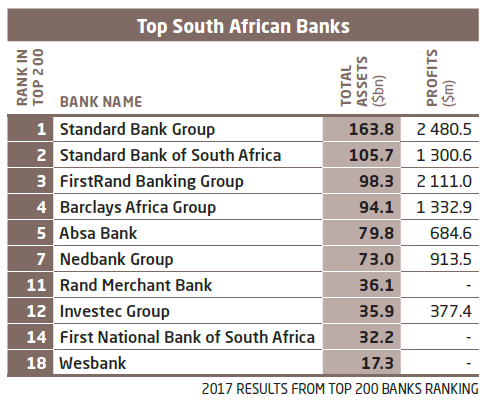 The Reserve Bank said that total banking sector assets increased 5.7% year-onyear to more than R5tn ($378.8bn) at the end of 2017. The central bank added that the 12-month moving average operating profit growth rate decreased throughout 2017, mainly due to a decline in the growth of net interest income and an increase in operating expenses.

Operations in the rest of Africa offer growth for some of the players, but generally earnings growth in the medium term is dependent on cost savings, says Mergence Investment Managers’ head of listed investments, Bradley Preston.

There is still nervousness among investors in South Africa, spurred by the downfall of some major companies, including Steinhoff.

For banks, President Cyril Ramaphosa’s announcement of land expropriation without compensation is another potential challenge. “How land expropriation is executed is obviously important to the banks as lenders against property and lenders in the agricultural sector,” Preston concludes.