South African President Cyril Ramaphosa has announced the 28 individuals who have been chosen to form the country’s new cabinet. The President said he had reduced the Cabinet from 36 to 28 as part of his plans to reconfigure the state.

Ramaphosa said that half of the ministers are women (making good on his promise of a balance of men and women in the new cabinet), and that there are now a number of young people in cabinet positions. Ramaphosa said his appointment of young people was part of his fulfilment of his commitment to give young people roles of responsibility. “This is part of a generational transition in which we are creating a pipeline of leaders to take our country further into the future,” he said.

The African National Congress Women’s League (ANCWL) is pleased that half of the president’s new Cabinet are women. ANCWL’s general secretary Meokgo Matuba said: “As disciplined as we’re, we still have further consultation and engage with those who are deployed various spheres of government to get to align our role in dealing with socio-economic challenges that we’re faced with as a country.”

Ramaphosa’s announcement follows weeks of speculation about who would be included and who will be left out from the previous cabinet. He has also faced tough pressure to appoint a scandal-free cabinet which does not include individuals who have been tainted by allegations of corruption.

Notably, Deputy President David Mabuza has retained his position, after initially delaying his being sworn in as an MP so as to report to the ANC’s Integrity Commission on matters concerning his conduct. Mabuza supported Ramaphosa in his initial bid for the Presidency in 2017.

Nkosazana Dlamini-Zuma was appointed to the portfolio of Cooperative Governance and Traditional Affairs. She competed with Ramaphosa for ANC leadership in 2017.

Pravin Gordhan has been retained as Minister of Public Enterprises. The move came despite the fact that Gordhan has still not been legally “cleared” by the court after Public Protector Busisiwe Mkhwebane’s adverse finding against him last week. Gordhan has lodged an application for a court review of the protector’s report, but there has been no decision yet. Ramaphosa’s move may indicate confidence in Gordhan, and a rejection of Mkhwebane’s assessments.

The office holders can be seen in the table below. 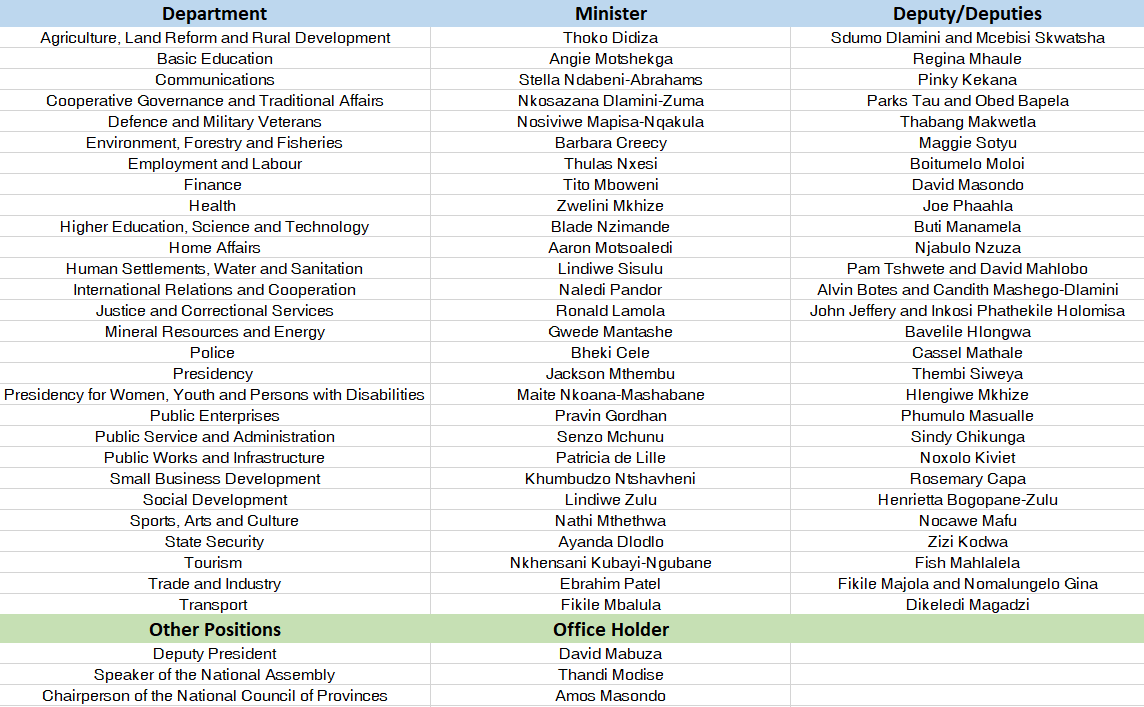 Interestingly, GOOD party leader Patricia de Lille has been appointed a Minister in the ANC’s new cabinet. After a protracted debate with the DA in the Western Cape, former Cape Town Mayor de Lille formed the GOOD party not long before the 2019 general election, and won seats in both the National Assembly and the Western Cape Provincial Parliament.

de Lille has pledged to “continue the struggle for dignity and fairness for all South Africans”. In a short statement after her appointment on Wednesday night, the GOOD party leader said she was humbled to have received the call from president Cyril Ramaphosa to serve in his Cabinet.

She said her new post would enable her to continue fighting for an accountable and compassionate government. “On President Ramaphosa’s election to the Presidency last week I pledged GOOD’s constructive support for turning South Africa around.

“This support we will wholeheartedly give, but I will be joining President Ramaphosa’s executive with open eyes and ears as a representative of good South Africans of integrity who love their country and demand better of their leaders,” said de Lille.

The reappointment of finance minister Tito Mboweni and minister of public enterprises Pravin Gordhan has been positively received by the market, with Ramaphosa also ditching controversial figures such as Nomvula Mokonyane and Bathabile Dlamini.

Democratic Alliance (DA) Leader Mmusi Maimane said that there was very little to inspire in the line-up. “This is a Cabinet that looks the same actors playing to the same script, they’ve just been reshuffled along the deck and our focus now is to refine our plan, a plan that will bring us jobs”.

Economic Freedom Fighters leader Julius Malema is not impressed with President Cyril Ramaphosa’s cabinet for a number of reasons, including stating that it is still too large. Malema said, “There was no way [The President] was going to reduce cabinet because he wants to balance factions. He must appease everyone so that there is no war declared against him”. Malema was referring to the notion that factions within the ANC aligned with former President Jacob Zuma, including those in Parliament and those at Luthuli House, as well as organizations that the ANC consults on such decisions (which include the South African Communist Party and trade union COSATU) all have their own agendas and attempt to influence the President.

The Inkatha Freedom Party (IFP)’s response was lukewarm. Member of Parliament and spokesperson Mkhuleko Hlengwa said that the only real surprise inclusion in the new Cabinet was the inclusion of De Lille. “It’s safe to say the only surprise is Patricia de Lille, for the president to get an opposition member into the Cabinet,” Hlengwa said.

Promises from the President

At his inauguration on Saturday, Ramaphosa admitted that the journey ahead was not easy. He faces expectations for a clean-up of corruption which has engulfed a number of government departments and crucially state-owned enterprises.

“In recent times, our people have watched as some of those in whom they had invested their trust have surrendered to the temptation of power and riches. They have seen some of the very institutions of our democracy eroded and resources squandered. The challenges that we face are real. But they are not insurmountable,” Ramaphosa said.

The President also faces the tough battle of dealing with social economic issues that have plagued the country including rising unemployment and an under-performing economy. There is also the issue of a lack or poor service delivery in many parts of the country.

In his announcement on Wednesday, Ramaphosa said revitalising the economy is key while also ensuring that the public purse is kept in check. He said a reconfigured State is a process and journey and that combining the various departments was part of the process.

Had the cabinet been kept the same (at 72 members, with 36 ministers and 34 deputies) the total cost – excluding the President – would have come to R156.5 million. The reduced cabinet will save the country R19.2 million during the financial year.

AfricaCheck reports that some of the major perks include private cars, official vehicles, accommodation, travel expenses, and other expenses.