New World Wealth and AfrAsia Bank have published the latest African Wealth Report, showing the levels of wealth of various African nations at the end of 2018.

According to the report, South Africa is still the richest country in Africa, with the high net worth (HNWI) population of 39,200 people holding the most wealth at $649 billion.

This is double that of the second wealthiest African nation, Egypt, where the HNWI population of 16,700 people holds $303 billion.

Total wealth held on the continent amounts to US$2.2 trillion. Around US$920 billion (42%) of this is held by HNWIs, New World Wealth said.

While South Africa ranks at the top of the list, on a per capita basis ($11,450), it is only the second wealthiest nation – following behind Mauritius, where wealth per capita sits at $31,000.

South African cities ranks as the top richest cities on the continent, with Johannesburg and Cape Town holding the most HNWI wealth among the major cities covered, taking the first and second spots, respectively.

Most of Johannesburg’s wealth is concentrated in Sandton, New World Wealth said, which is home to the JSE (the largest stock market in Africa) and to the head offices of most of Africa’s largest banks and corporates.

Cape Town, meanwhile, is home to Africa’s most exclusive and expensive suburbs such as Clifton, Bishopscourt, Camps Bay and Bantry Bay. It is also a hotspot for wealthy second home owners from around the world. Major sectors there include: real estate, financial services (fund management), retail and tourism.

Also in the top five from South Africa is Durban and Umhlanga (combined), which holds total HNWI wealth of US$54 billion.

This figure includes wealth held in Durban, Umhlanga, La Lucia and Ballito. Notably, Umhlanga and Ballito are two of the fastest growing areas in SA, in terms of wealth growth over the past 10 years, the group said.

Total wealth held in Cairo amounts to US$129 billion – and the city is home to more billionaires than any other African city (four billionaires live there, compared to just two in Johannesburg).

In Lagos, total wealth held in the city amounts to US$96 billion. This is the largest city in Africa, in terms of population and GDP (but not in terms of wealth). 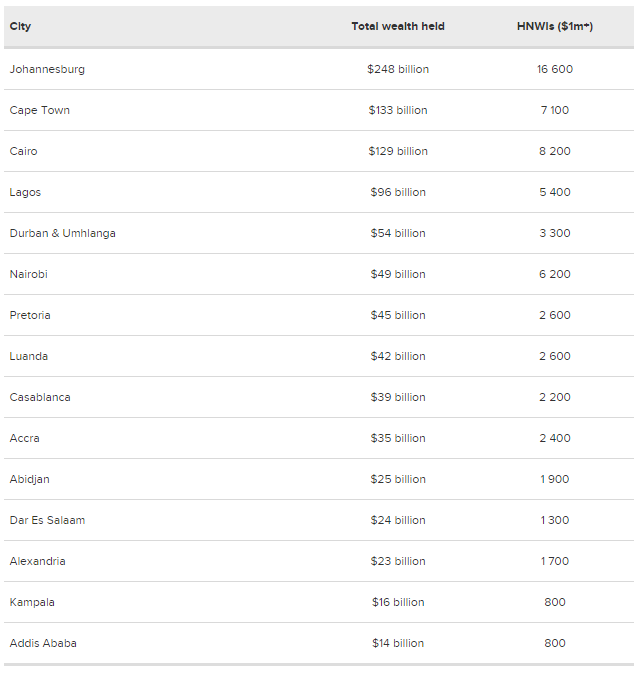 The richest cities in Africa. 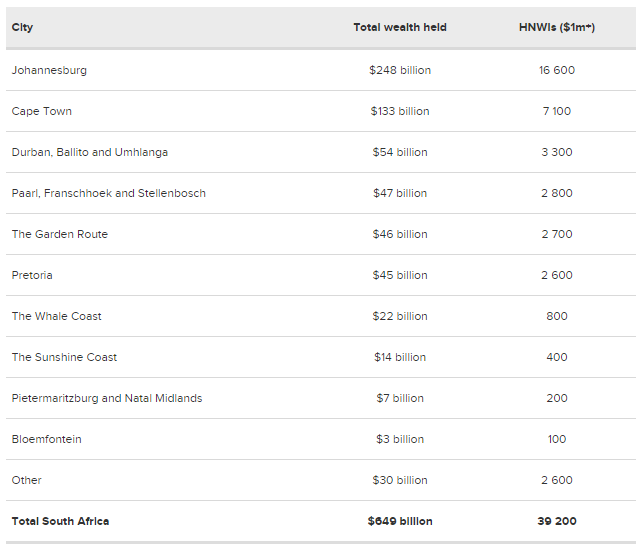 The richest areas in South Africa.