The City said it had already actioned its Water Strategy as 15 million litres of groundwater had come online from the Table Mountain Group Aquifer daily, while other projects including permanent desalination and water reuse were also planned.

Mayco member for water and waste services Xanthea Limberg said: “The temporary desalination plants at Strandfontein and Monwabisi were constructed as emergency water supplies at the height of the drought crisis have both been decommissioned by the contractor in terms of contractual requirements.

“The City also gained valuable knowledge and experience that will be incorporated into the planning and operation of the larger, planned permanent plant.”

It is provisionally programmed to commence water production by the end of 2026, Limberg said.

“The fixed component of the tariff covers approximately 20% to 25% of the water costs. If this was dropped, the consumptive tariff would have to be increased to compensate. No profit is made from the sale of water, and the City strives to keep costs as low as possible,” she said. 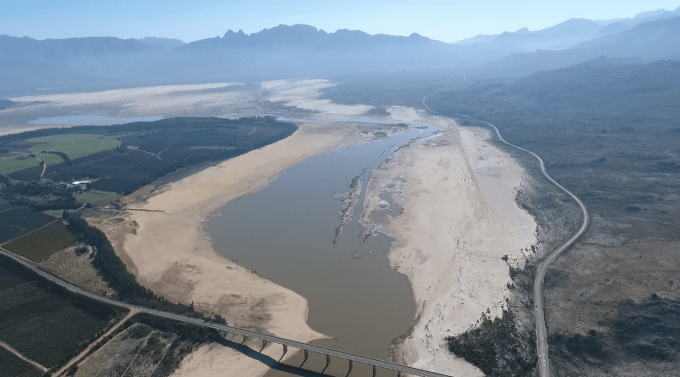 The Western Cape experienced a severe drought during 2017 and 2018, and dams almost emptied in terms of usable water. Residents were preparing to line up for water rations distributed by the South African Defense Force. Due to a continued global increase in emissions, climate change is altering weather patterns around the world for the worse, and urgent action is needed.

In September last year, it was reported the City was looking to build another desalination plant to become water-resilient by 2026. The City is considering the development and commissioning of a permanent desalination plant with a capacity of 50 million litres per day by 2026.

In response to the drought, the Strandfontein, Monwabisi and V&A desalination plants were commissioned for a two-year period as part of the City’s Water Resilience Plan, now referred to as the New Water Plan. A combined total of 14 million litres a day were supplied from these plants.

The City has maintained the fixed charge contributes to the fixed costs for operating the water and sanitation service and that fixed charges for basic utility services are in place in municipalities nationwide.

UCT Future Water Research Institute’s interim director Kirsty Carden said the need for a permanent desalination plant would depend on how the demand for water in the city changed over time.

“The ‘Day Zero’ crisis highlighted the fragility of a water system that is dependent primarily on one source (rain-fed surface water storage) and the need for diversifying water resources for the city, to include groundwater, desalinated seawater, treated sewage effluent and storm water harvesting as a means of building resilience.

“It is likely that permanent desalination will have to be included in this suite of planning options at some stage. Through their New Water Strategy, as well as the Resilience Strategy, the City has already acknowledged that a different approach is needed to managing water resources towards building a water-sensitive city.”

The Mother City has come a long way since Day Zero. The dams supplying Cape Town with water are at an historic 100.8%, and are full for the first time since 2014.

This time last year, dams were 81.4% full, in 2018 they were 75.9% full and in 2017, an astounding 37.7% full. Theewaterskloof, the Western Cape’s largest source of water, is currently overflowing. Three years ago the very same dam was at 12.9% full, and Cape Town was days away from being the first city in the world to run out of potable water.

On October 2, the City announced that the dams have reached 100% capacity, thanks to an intensive whole-of-society effort to protect our available water supply before, during and after the shock of Day Zero.

“It is clear that as a society we have completely changed our relationship with water,” said the City’s Mayoral Committee Member for Water and Waste, Alderman Xanthea Limberg. “The City’s water saving achievements have been internationally lauded, with the International Water Association naming Cape Town the world’s number 1 water saving city for reducing demand by 55% between 2015 and 2018 without resorting to intermittent supply.”

However, Limberg warns that this exciting milestone does not indicate permanent water security. “Full dams may give the impression that our troubles are over, but rainfall this year was only just above average. Low consumption has also contributed to the recovery of the dams. Although there is some room to relax, we need to remain vigilant that water consumption remains at a water wise level and proceed diligently with additional water sources including groundwater, reuse and desalination as outlined in the City’s Water Strategy,” she said.

She warns that another drought could strike, and last much longer than the one The Mother City battled over the last few years. “Climate change studies undertaken by the City indicate that droughts such as the one we have just experienced will occur more often and last longer.”

On the question of easing water tariffs, Limberg adds that appropriate tariffs and restrictions for the 2020/21 hydrological year (which runs from November 1 to October 31) are currently taking place. “Tariffs are currently on the second lowest level possible in terms of the City’s 2020/21 Budget, and have come down significantly since the peak of the drought. The no restriction, water-wise tariff which is under consideration will provide some relief, but with due cognisance of the importance that sufficient funding is available to continue increasing our resilience. “Also being taken into consideration is the projected increase of the proportion of residents needing indigent support, in part due to the deteriorated national economic climate.”