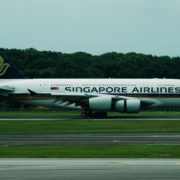 The 2018 AirHelp Score report has been released. AirHelp is a company that advocates on behalf of air travelers for compensation in cases of delays or cancellations. Its sixth annual survey uses data from the first quarter of the year to rank the 72 international airlines for which the company had statistically significant data.

Overall rankings are based on three factors: on-time performance, quality of service (gleaned from public reviews on an array of reliable websites), and a claims-processing score (which reflects how a company handles customer complaints).

“South African Airlines has a fantastic claims-processing score,” explains Ashley Raiteri, an industry adviser for AirHelp—the airline earned 8.69 points of a possible 10—and it’s also got a good track record of keeping flights on time.

“Irregularities in flights are going to happen,” Raiteri adds. “What’s important is whether the airline has planned for that so they can make the experience less hellish for the consumer.”

With that in mind, here are the best and worst airlines of the year, according to AirHelp, along with their on-time performance records.

Surprises exist on both lists. Iberia—which ranked among the best airlines on a similar report from FlightStats last year that was configured purely according to on-time performance—appears in AirHelp’s worst airlines list, a reflection of its poor “claim processing score”.

“Delta has a great on-time performance, but in dealing with claims, more often than not they either ignore them or reject them out of hand, forcing customers into court in order to pay what they’re legally obligated to pay,” Raiteri tells Bloomberg. While the three airlines won nearly identical scores in “quality of service,” Delta was the category leader by a few tenths of a point.

While budget carriers did not fare well, with Ryanair DAC, EasyJet Airline Co., and WOW Air all appearing among the bottom 10 airlines, there was one exception: Norwegian Air Shuttle ASA ranked 12th overall, reflecting a 76 percent on-time record and very good scores both for claims processing and quality of service.

The data concerning best and worst airports contain similar surprises. No American hubs were ranked in the top 30—Seattle-Tacoma took the domestic lead, in the 33rd slot—while a large number of Brazilian airports dominated the charts, something Raiteri attributes to good local weather and a “hub and spoke” route network that keeps flights moving smoothly and on time.

“Different airports deal with different problems,” Raiteri explains, saying that Hartsfield–Jackson Atlanta has recently battled a series of power outages, while airports in Scandinavia tend to get knocked for weather delays, despite their sleek looks and efficient service.

“In some places, the local culture can leave people feeling cold,” Raiteri adds, describing the direct style of security agents in northern Europe. Here are the best and worst airports of 2018.

One note of optimism: Raiteri says most airlines and airports that descended in the rankings this year did so because the marketplace is becoming more competitive, not because their individual performance is declining.

“What we mostly see is improvement, to be honest,” he tells Bloomberg. “Most airlines have been late to recognising their responsibility, but after all the publicity that United got last year, we’re seeing airlines taking a much different approach to dealing with passengers.”

For both airlines and airports, he says, “We don’t see folks falling in rank due to poor performance, but because another entity is doing better and pushing them down.” Consider it a silver lining the next time you’re stranded at the gate.