Durban – It has been almost a year since xenophobia reared its ugly head in KwaZulu-Natal, yet the future of more than 100 refugees still hangs in the balance as they pin their hopes on the UN sending them to another country, “where we will be safe”.

Speaking to the Daily News on Sunday, Musa Zakwe, of the South African Council of Churches – which has been supporting the refugees – said the group had left Hope Farm, Cato Ridge, where they had been housed for seven months by owners Andrew and Rae Wartnaby, on Tuesday last week.

Relations between the Wartnabys and some of the refugees had become strained in recent months with threats made on the family’s lives.

Zakwe said the UN Refugee Agency, UNHRC, might only be able to relocate some of the refugees to another country after a long process which would involve individual assessment and would not be a wholesale solution.

They were advised of this at a meeting, but when it turned out they would not return to Hope Farm, they were accommodated at a shelter in Durban’s CBD for the night.

A week later, and the women and children are still there, living in squalor in a 15-bed room with access to only one toilet on their floor.

The men are housed in another room on another floor with barely any space to step between their mattresses or bed bases.

Among them is Beby Irakoze who gave birth to her fifth child, Rae, five months ago at Hope Farm.

Another Congolese woman, Anna Zawadi is eight months pregnant. Both women are concerned about sanitation and want to take their children to live in a safe environment.

Zakwe said there was no money to pay for the shelter and the way they were living was unsustainable. He said the council advocated integrating the refugees into the communities where they had lived before the March and April xenophobic violence last year.

But the refugees fear going back into the communities and are afraid to venture out of the shelter into town because of their experience of xenophobia.

Zakwe said there was no reason for the refugees to feel unsafe in the city. They were not identifiable as foreigners, he said. “But I do understand why they are afraid,” he said. “They have been living in seclusion for some time and it is a normal reaction.”

On Friday, a meeting was held to discuss the matter.

A spokesman for Premier Senzo Mchunu said social workers had been tasked with doing profiles and the premier was co-ordinating assistance for the group.

“The premier’s priority is the 58 children who are living in conditions where sanitation is questionable and there is a shortage of water. They are also not going to school,” said Ndabezinhle Sibiya.

It was yet to be decided what to do next for the displaced families.

Mchunu was due to release a report by the special reference group on the xenophobic violence later this week.

The group – headed by former UN high commissioner for human rights, Judge Navi Pillay – undertook a study of the underlying causes, possible solutions and other factors.

Andrew Wartnaby said of the group’s leaving, that it had been “quite amazing”.

“The situation had deteriorated so drastically and their living conditions were so bad, we didn’t want them here anymore,” he said, “And they didn’t want to be here.”

After meeting the UNHRC, the group left of its own accord, he said.

In December the Daily News’s sister paper, the Sunday Tribune reported the Wartnabys had been living like prisoners in their own home after Andrew’s life was threatened by disgruntled refugees.

They accused him of being a government agent and claimed he was starving them and benefiting financially from donations made by those who wanted to help the displaced immigrants.

The refugees were also divided, with a rebel group denouncing their elected leader.

Wartnaby told the Sunday Tribune he was terrified to walk on his farm after a fire broke out. It was believed to have been started by the rebel group burning a tent.

“I am very scared of this group. It does not feel safe here. They threatened to cut off my head and kill my family. I walk very carefully around here. We have public order police on site every night since the incident occurred. I feel like a prisoner in my own house. It is a difficult situation,” Wartnaby said.

The Wartnabys took in the refugees – from the Democratic Republic of the Congo and Burundi – after the eThekwini Municipality closed the refugee camp where they had been staying in Chatsworth in June last year.

Anna Zawadi, from the Congo, who is eight months pregnant with her fifth child worries about the future of her children. They are living in squalor at a Durban CBD shelter after moving there last week.

Although the more than 100 refugees are supposed to leave the shelter during the day, they do not venture out into town, because they are still afraid after last year’s xenophobia.

July Sabuni prepares a meal in the crowded room she shares with other women refugees and their children. 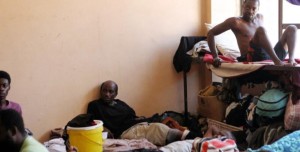