Many African countries have received their first shipment of the vaccine although there are concerns regarding the shortage of supply. The deliveries of the vaccine supplies began in February under the Covax programme, which most African countries have signed. The Covax is backed by the World Health Organisation (WHO) and other multilateral bodies.

The Covax programme aims to supply 600 million doses to Africa, which will suffice in vaccinating at least 20% percent of the population. Currently, the Covax initiative has delivered more than 20 million doses of vaccines to more than half of the African countries.

1. Ghana has received more than 600 000 doses, using more than 420 000.
2. Rwanda has received under 400 000 dosses, vaccinated more than 320 000.
3. Mali, Cameroon and the Democratic Republic of Congo has halted the rollout of the Astra Zeneca vaccine due to concerns vaccine on hold as a precaution after concerns were raised in some European countries over its safety.
4. China has donated doses of the Sinopharm vaccine to Zimbabwe, Namibia, Equatorial Guinea, Egypt, Tunisia, Sierra Leone and Guinea.
5. The United Arab Emirates also donated Sinopharm doses to the Seychelles.
6. India has donated the AstraZeneca vaccine to Kenya, Uganda, Rwanda, DR Congo, Ghana, Ivory Coast, Senegal, Mozambique, eSwatini, Botswana, Mauritius and Seychelles.
7. Senegal donated some of the vaccine doses it bought from China to the neighbouring Gambia.
8. Russia donated some doses of the Sputnik V vaccine which were used on an experimental basis in Guinea.
9. South Africa has begun vaccinating after receiving 80,000 doses of the Johnson & Johnson vaccine, which is administered as a single dose and has been shown to be effective against the variant. It delayed the start of its programme because of concerns that the AstraZeneca vaccine, which it had initially purchased, may not be effective against a new variant. 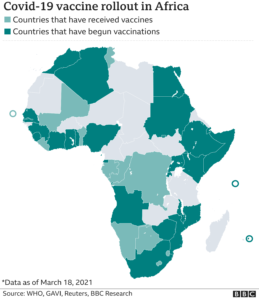 Facebook in Partnership with WHO Launches Campaign to Tackle Fake Covid-19 and...
Scroll to top