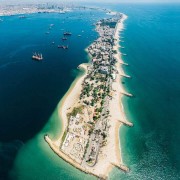 Don’t count on English. Forget Lisbon or Brasilia: with a population of more than six million, Luanda is the world’s most populous Portuguese-speaking capital city. (The population swelled during Angola’s 27-year civil war, when millions of refugees moved to the relative safety of the city.) English is not widely spoken, even in Luanda. Just a few basic words in Portuguese will take you far: Obrigado (thank you), bom dia (good morning), por favor (please), sim (yes), não (no), and bué (a lot). The expression fixe (“feesh”), meaning okay or cool, is also deeply useful.

Get your papers in order. Angola’s visa process is a bureaucrat’s dream: slow, confusing, and arcane. From 1975 until 1991 Angola was a socialist, one-party state closely aligned with Russia and Cuba. In a hangover from its Cold War mentality, Angola still treats foreigners with suspicion, and it will seem like some embassy officials take pride in complicating things for would-be tourists. Factor in at least one month to sort out visa matters. Different consulate officials will tell you different things about which documents you need to bring—and you will need a letter of invitation from an Angolan citizen or a company.

Botswana allows visa on arrival for Emiratis
Scroll to top