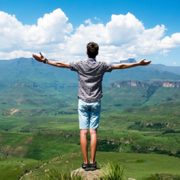 Several years later and you’re still on the move abroad… are you addicted to expat life? If these telltale signs are true, it’s time to admit you’re a serial expat.

1. Your passport is an adventurous read

You have wings, not roots, and your passport pages prove it. Even your dog’s passport has more stamps than the average tourist but who’s counting anyway.

2. Your furniture and home decoration are a testimony of where you once lived

A couch from South Africa, carpet from the Middle East, artwork from Brazil, blankets from Scotland. Home is everywhere.

3. You’re a master at packing up and unpacking your house

4. You always crave that dish you can’t have

Because that one restaurant is located on the other side of the world. Or that one ingredient is just not available where you live now.

5. You have to save money to attend the weddings you’re invited to

They take place in all corners of the world.

6. Your friends are scattered all over the globe

And you dream of having them all together in one place some day. Maybe you should get married and have a wedding.

7. You forget which side of the road the cars drive

Left, right, right, left, you lost track a while ago. Best to go with the flow – and remember to look both ways when crossing the street.

8. You keep track of what goes on in all the countries you’ve lived

Politics, economy, gossip from around the world: it’s a day job. In fact, you’d make a great reporter. Anyone know if CNN has any vacancies?

9. You are an unofficial ambassador of your ‘home’ country – and the ones you’ve ever lived in

10. Your parents think you work for the CIA

11. You can answer the question ‘where are you from’ in less than 30 seconds.

12. You don’t know who to support in the World Cup or Olympics

13. You include words from several languages into one sentence

Some things are best described with that one word that just doesn’t translate. But that’s just an excuse – in reality your brain just can’t juggle it all anymore.

14. You easily adapt your English verbiage and accent as necessary

Pavement/sidewalk/footpath, toilet/washroom/loo, jersey/sweatshirt/jumper, dummy/pacifier/soother – you have ’em all down. It’s just that your parents now think you speak with an accent.

15. You know it’s of utmost importance to befriend someone with access to international shipping perks

16. You list all your past addresses and dates you lived there in a special document

Someone needs to keep track.

17. You pray your children will not apply for the foreign service

And have to answer questions such as ‘list all foreigners you’ve been in contact with’. At least you’ll have #16.

18. You fear the day you have to get a certificate of good conduct from all the places you’ve ever lived

And make sure it’s certified, with all the right stamps and then some, and also translated by an official translator. Again, at least you’ll have #16.

19. You have to track bank accounts in various countries

They come in handy all the time.

20. You’re a master in converting currencies

Pound, dollar, euro, rand, metical, dirham; divide, multiply, add, subtract. You have a phone app that does it marvelously well.

21. You have a bag full of change from different countries

You’ll use it… some day.

22. You met some of your best friends through Facebook

Thanks and hallelujah to the makers of social media!

23. You realise it isn’t the easiest life you’ve chosen

But you wouldn’t want it any other way.

The original article was posted here.