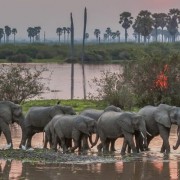 Serious measures have to be put in place to save about 15,000 elephants in Tanzania’s Selous Game Reserve, which are on the verge of extinction due to illegal poaching.
Tanzania’s largest game reserve is under threat.

Elephants in Selous Game Reserve could be wiped out within six years following heightened poaching, the World Wildlife Fund (WWF) has warned.

The oldest in Africa, the reserve once boasted 110,000 elephants in the 1970s. Today, it has around 15,000 remaining, and they are threatened by “industrial-scale poaching”.

Increased poaching is driven by demand for ivory from Asian nations and in particular China. If urgent measures are not taken, the Selous “could see its elephant population decimated by 2022,” the WWF said in a report.