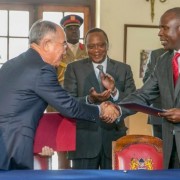 In less than 24 hours this week Kenya signed two pacts on nuclear energy cooperation with South Korea and Russia, setting the stage for a dead-heat race against China to clinch the east Africa nation’s forthcoming nuclear energy development contract. 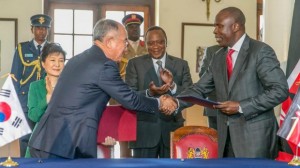 The first deal was in Moscow on May 30, 2016 where Russia’s state nuclear agency, Rosatom Deputy Director Nikolai Spasskiy and Deputy Head of the Kenyan Embassy to Russia Hillary N. Kyengo signed a Memorandum of Understanding (MoU) that involves the creation of a working group to identify peaceful nuclear projects and also continue consultations on the possibility of building the first nuclear power plant in Kenya.

A day later and thousands of miles away in the Kenyan capital, Nairobi host President Uhuru Kenyatta and Korean President Park Geun-Hye witnessed the signing of a nuclear corporation pact after they held bilateral talks.

“By signing this MOU, Kenya is set to benefit from Korea’s expertise in power generation. Korea has a unique model of power development that has ensured stable supply of electricity through continuous constructions and safe operations of power plants,” the Kenyan Presidency said in a statement.

Ethiopia Wants To Be Africa’s No. 1 Auto Manufacturer
Scroll to top