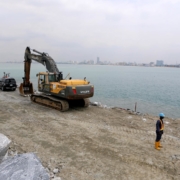 An additional 1.3 billion people will be added to Africa’s population by 2050 and, unless infrastructure development happens at an unprecedented pace, sharp housing shortages will likely be an offshoot of the rapid population growth.

The problem will be even more acute in urban areas as more people migrate to cities for access to economic opportunities and better living standards. Indeed, by 2050 all of Africa’s key sub-regions will have more than 50% of their population living in urban areas. A new report by Estate Intel, a real estate market data and research firm, shows private developers and governments across the continent are spending over $100 billion on new sprawling city projects from Utopian sea-side business districts, smart tech hubs to futuristic residential cities.

Of the eighteen major new city projects analyzed in the report, Nigeria accounts for five which, when completed, will cover a landmass of more than 25 million square meters. Nigeria, already Africa’s most populous country, is set to become the world’s third largest by population in 2050. But the pace of new city developments do not always match population size: Mauritius, the Indian Ocean island nation of only 1.2 million people, has four major new cities planned. 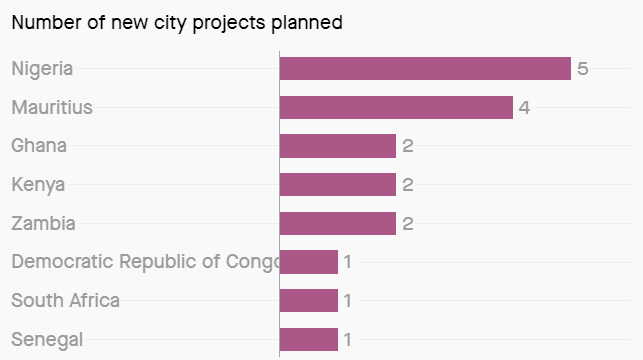 As land in urban city centers is already scarce, a majority of the new cities planned or in development are situated on the fringes of existing cities. It’s a necessary compromise as the new cities will require brand new, more efficient infrastructure—independent of existing amenities like sewage, roads and power—to justify the huge financial outlays. Many of the new cities are futuristic in design and also in delivery dates as typical timeline for completion ranges from 10 to 30 years comprising of planning, development and sale processes.

Marketing the new cities to prospective new inhabitants happens long before they’re completed. Developers often pull out all stops from promising early bird discounts to using slick marketing videos to showcase the cities. It’s a tactic that often drives early adoption and then a surge in value of the property. For instance, land prices in Lagos’ Eko Atlantic have nearly doubled since construction began in 2008.

But as new city construction ramp up, it’s unlikely they will make a big enough dent in the housing shortage as they ignore the socioeconomic realities of locals. Once they are completed, much of the luxurious apartment homes will likely remain out of reach for a majority of citizens in need of housing. Indeed, Senegal’s $2 billion Diamniadio Lake City is already facing strong criticism as being “planned without inhabitants in mind” amid fears that its costs could worsen Senegal’s debt problems. Meanwhile, in Vision City, Kigali, one of the country’s string of proposed “smart cities,” a home unit costs around $160,000 even though up to 80% of the city’s population live in slums. 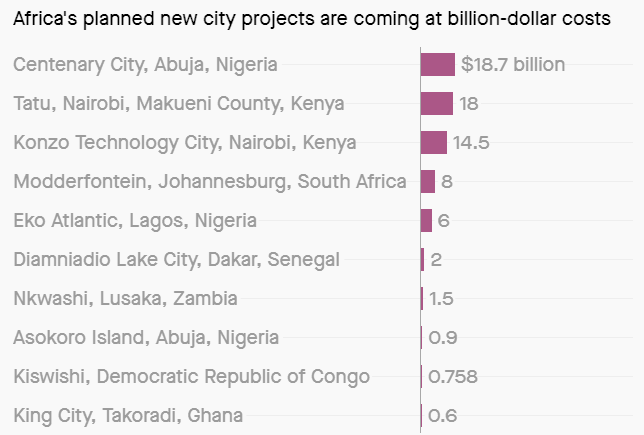 There’s also the question of the effects new city projects will have on the wider population, especially when land reclamation from the sea is involved. A prime example is Nigeria’s Eko Atlantic project, a 6-mile city built on land reclaimed from the Atlantic Ocean. While the new city will have a sea wall wrapped around it to protect it from the ocean’s storms, experts say it will leave other parts of Lagos even more susceptible to flood.