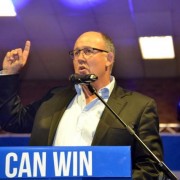 Yet local elections this week have shown a shift in South African society and politics, which have been dominated by race since Mandela swept to power in 1994.

The results may even mark the start of a new era, distinct from the ‘post-apartheid’ period that immediately followed the end of white-minority rule, as the African National Congress wakes up to the changed reality that it can no longer rely on the unquestioning support of poor black voters.

Angry about corruption, unemployment and shoddy basic services, many ANC supporters have turned to the opposition Democratic Alliance (DA) – making a switch that was unthinkable only a few years ago when the party was still seen as the political home of wealthy whites.

Voters have also become disillusioned by festering inequality; black people make up 80 percent of the 54 million population yet, two decades after apartheid, most of the economy in terms of ownership of land and companies remains in the hands of white people, who account for about 8 percent of the population.

DA candidate Trollip, a fluent speaker of the local Xhosa language, is likely to become mayor of the Nelson Mandela Bay municipality after his party won 47 percent of the vote against the ANC’s 41 percent, down from 52 percent five years ago.

The DA is now expected to form a coalition with smaller opposition parties to run a region that has been an ANC stronghold for more than two decades.