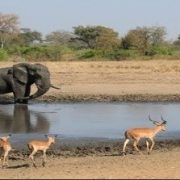 TU collates some of the land and air options to get to the Kruger National Park and surrounding game reserves.

Federal Airlines has carved a niche for itself in the sphere of air shuttle services to game lodges, offering passengers a speedy and ‘VIP’ means of getting from major cities to their bush retreat.

According to Nik Lloyd-Roberts, Commercial Manager, the airline has partnered with some 100 lodges in the Greater Kruger area, Madikwe and Phinda. It also operates inter-lodge services in the Lowveld.

The shuttle services differ from scheduled services in that an inventory of a specified number of seats can be sold for a service, but not all seats will be on the same aircraft.  Federal Airlines has six aircraft types in its fleet, accommodating from four to 50 passengers. Seats can only be purchased through partner lodges or tour operators.

In the Greater Kruger area, which includes Sabi Sand, Timbavati and Manyeleti, the airline has a daily inventory of 41 seats on the morning departure and 34 seats in the afternoon.  A premier shuttle service flies from OR Tambo International to Kruger-Mpumalanga International Airport (KMIA), and additionally to the private airstrips of certain lodges or to communal airstrips that serve a cluster of lodges.