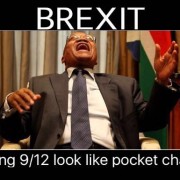 UK Prime Minister David Cameron has announced – in an emotional speech outside his Downing Street residence – that he will step down in October, following Britain’s vote to leave the European Union (EU). See video below.

The Leave campaign won 52 percent of the vote, sending shock waves around the world and causing currencies to plummet – including South Africa’s Rand which fell more than on the day President Zuma fired finance minister Nhlanhla Nene. At that time, the Rand fell by 5 percent. Last night it dropped 7.8 percent.

Meanwhile, in other news, the bid by the South African president’s lawyers and the National Prosecuting Authority (NPA) to appeal the #SpyTapes ruling that Jacob Zuma face corruption charges has been dismissed with costs, causing some on Twitter to coin the phrase “No #Zuxit for Zuma”. The High Court in Pretoria announced this morning it has dismissed his leave to appeal.

Shortly afterwards opposition party, the Democratic Alliance (DA), tweeted: “The prosecution against President Zuma must proceed & he must have his day in court as he has always claimed he wanted.”