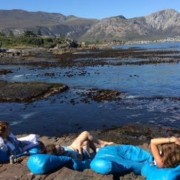 South Africa has strong political, economic, cultural and social ties with its former colonizer, the U.K.

The financial markets suffered in the aftermath of the historic referendum to leave the European Union. Brexit has implications for the South African economy, and South Africa must focus on what it can control.

South Africa has been experiencing a currency crisis with the rand losing value against major currencies. This has hurt economic growth. South Africa is likely to enter a recession as the economy won’t grow more than 1 percent this year.

South Africa imports more than it exports, and this has led to a huge trade deficit as a percentage of GDP. The economy depends on foreign direct investment to drive growth, in line with the country’s export-led economic policy. The economy is also suffering from job shedding in mining as commodities prices have plummeted, and labor costs have increased, increasing the cost of doing business. The rand’s weakness has increased the cost of living.

The rand’s value loss means that South Africa becomes much more attractive as a value-for-money destination. Tourism is an export product that is consumed at the destination, because it is a service that is simultaneously produced and consumed. This means that the majority of value addition can happen within the country, in contrast to exporting raw materials and importing the final product — so prevalent in the mining sector.

Why Is Japan Investing In Zimbabwe And What Does N. Korea Have To Do With I...
Scroll to top