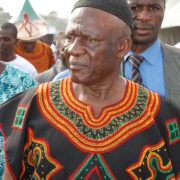 Cameroon’s main opposition leader, head of the Social Democratic Front (SDF), John Fru Ndi, has said that he will not challenge the long-ruling President Paul Biya in this year’s elections. Ndi has run as a candidate in the 1992, 2004, and 2011 elections, and boycotted the vote in 1997.

Biya stated during the 2011 elections that they would be the last he contested, and has said he wishes to pass the torch to the individual his party most prefers. The party is set to nominate a replacement candidate either today or tomorrow. The SDF draws much of its backing from two enclaves in the west of Cameroon.

Biya has been President of Cameroon since 1982. The office of President has a 7 year term, but no term limits. His party, the Cameroon People’s Democratic Movement (CPDM) currently has 148 seats out of 180 in the country’s National Assembly. Meanwhile, the SDF has 18. Biya has not yet said whether or not he will run in this year’s general election.

Biya’s presidency has been criticized to a large degree, characterized by exploitation, corruption and repression, with his firmly rejecting any change to the status quo, and imposed night-time curfews, restrictions on movement, raids, and body searches in the country’s anglophone regions. Anglophone demonstrators have demanded a federal state, while some secessionists have even called for an independent state they have dubbed “Ambazonia”, due to what they say is discrimination by the French-speaking majority.

Cameroon uses a first-past-the-post voting system, and its general election will take place in October 2018. The exact date is yet to be set.