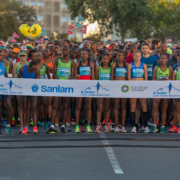 On Sunday, 15 September, the Sanlam Cape Town Marathon will take place in the Mother City, with more than 26 000 local and international runners taking part in an event that’s fast becoming known as Africa’s “must-run” city marathon.

Olympic long-distance runner Elana van Zyl-Meyer, ambassador for the marathon, knows from personal experience what goes into preparation for an undertaking of this kind, and how important spectators are on the big day. “A marathon is a long personal journey. For some of us it takes sheer will and guts, while for others it’s a relative breeze. But either way, there’s nothing more energising and comforting than when you see a group of supporters cheer you on from the sidelines – it’s pure joy.”

The Sanlam Cape Town Marathon is Africa’s only IAAF Gold Label-status city marathon, meaning that the International Association of Athletics Federations designates it as one of the leading road races in the world. This year the organisers are pulling out all the stops to make sidelines magic, which is not only a prerequisite for the event to better its IAAF classification to Platinum, but also a reason for locals to come out and cheer on the athletes in Cape Town’s stunning springtime weather. Spectator zones have been set up along the 42.2km marathon route, giving supporters frontline views of the course action as well as an opportunity to enjoy live music and dance, and suppo. Some of the zones are co-hosted by local charities involved with this year’s event.

“Typically of big-city marathons around the world, some supporters get dressed up in crazy outfits to spur on family members or friends who’re running. Catching attention is the aim, and it works!” says Van Zyl-Meyer.

This year Sanlam has upped the prize values of its highly popular Gees Competition, which debuted at last year’s event. With a chance to win a share of R250 000, individual supporters, club members and charities are challenged to take part by dressing up, downloading an official fan bib from the marathon page on Sanlam’s website and wearing it as a bib on race day, then taking a selfie and sharing it to Facebook, Instagram or Twitter using #SCTMgees and tagging @ctmarathon. Winners are chosen at the end of the marathon weekend, with clubs and charities in line for cash prizes ranging from R5 000 to R50 000, and 20 spot prizes of R2 000 each for individuals.

The marathon is fast becoming a platform to bring attention to various social issues affecting communities in and around Cape Town. This year, over 50 charities will be represented and involved in the event, with many runners dressed in outfits appropriate for shining a light on a cause and charity about which they’re deeply passionate. For example, the five-runner sausage-dog suit will once again be featured for the Cape of Good Hope SPCA; sports academy Endurocad will feature runners dressed as comic-book superheroes; and participants with sapling trees strapped to their backs will be bringing attention to the Township Farmers’ #runninggreen campaign.

“Cumulatively, we hope to raise in excess of R3 million for charities across the Western Cape,” says Van Zyl-Meyer. “We’re a nation of doers and supporters, and I absolutely believe we can do it.”

The event will be televised live on SABC2 from 06h30 and will be live-streamed on the marathon website www.capetownmarathon.com

There will also be 5km, 12km, and 22km runs taking place on 14 September. To find out more about the marathon and other runs, click here.

Nigeria to Repatriate 600 Citizens from South Africa, in the Midst of Xenophobic...
Scroll to top