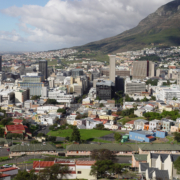 Cape Town’s position as an opportunity city was confirmed in the latest labour force survey results issued by Statistics SA.

“Today [Sunday], I am encouraged to see that Cape Town is recognised as Africa’s opportunity city, but in order for us to stay globally competitive we need to take the city to the next level and create opportunities for all,” De lille said.

A key intervention was for the city to decisively address apartheid spatial planning that kept the majority of residents away from opportunities to jobs, good education, and healthcare. “We also need to improve safety in these communities and support business development,” she said.

The city should be a catalyst for better integration of communities by speeding up release of the 11 identified pieces of land in Woodstock and the city centre while developing the Foreshore freeway project. More pieces of government-owned land should also be made available for the development of affordable housing. This would bring more Capetonians closer to opportunities, increasing the talent offering to international companies wanting to invest here.

Cape Town’s standing as an opportunity city was confirmed in the latest labour force survey results issued by Statistics SA.

The report found that employment in the metro grew 4.8 percent year-on-year. Cape Town was also the metro with the lowest expanded unemployment rate at 22.6 percent, far below the national rate of 37.2 percent, De Lille said.

However, PwC Africa’s head of cities and urbanisation Jon Williams was correct to say, “Cape Town is at a crossroads between African problems and global ambitions. Its future success will depend on its ability to solve longstanding problems at home while keeping up with a rapidly changing world.” These longstanding problems included access to opportunities for the majority of residents.

“We have shown innovation in the tech fields and Cape Town is home to over 20 tech incubators. But, as the report shows, many of these opportunities are based close to the city centre or along the Atlantic seaboard.

“If Cape Town wants to remain globally competitive we must bring residents closer to opportunities and be a catalyst for job creation and investment as outlined by the city’s organisational development and transformation plan (ODTP),” she said.

“The city’s support of catalytic industries has been one of the key successes and this sector is also showing growth as we attract more investment to Cape Town and more residents find employment and receive training in key skills areas.

“In the past three months, between April and June 2018, through the city’s support of Wesgro and our special purpose vehicles we facilitated almost R1.4 billion worth of investment, created 1 236 jobs, and trained 912 residents,” De Lille said.

At the end of the 2017/18 financial year in June 2018, the city, for the first time in its 18-year history as the metro government, exceeded its housing delivery target by 62 percent.

SA to Ease Visa Regime for China
Scroll to top