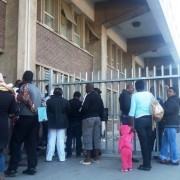 The Director General claims it is too difficult to procure sustainable space for the CTRRO. In all of its three former locations, neighbouring residents and businesses have complained that the high numbers of refugees make the office a public nuisance. The CTRRO has been ordered to vacate two of its three former premises.

The Scalabrini Centre argued that the difficulties in finding a location were to be expected, and it did not change the fact that Refugee Reception Offices (RROs) are necessary to protect the constitutional rights of asylum seekers. However, the judge upheld the claim that the difficulty in finding a location justified closing the office down, in spite of the burden placed on asylum seekers.