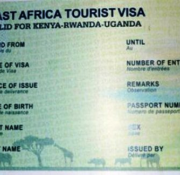 East African Community (EAC) regional block have never reached a consensus on the issuance of the single tourist visa by Kenya, Uganda and Rwanda.

“There has never been any agreement on the arrangement at the EAC level, as a matter of fact, the member states are still discussing the issue,” Acting Director for Trade and Investment in the Ministry of Foreign Affairs and East African Cooperation, Bernard Haule, said yesterday.

Mr Haule was responding to allegations by some media outlets and social networks, suggesting that Tanzania had snubbed the multi-entry visa for tourists outside the regional bloc.

The official maintained that introduction of the arrangement for all EAC member states was still under discussion through sectoral meetings on tourism and wildlife, noting that Tanzania was fully participating to the deliberations.

The ‘Daily News’ has separately learnt that even the three countries that have embraced the single visa are at loggerheads due to differences in national visa policies and regimes in Uganda, Kenya and Rwanda.