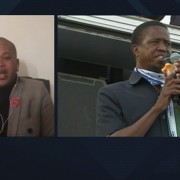 JOHANNESBURG – Zambians began voting for a new president and legislators on Thursday, millions are expected to cast their ballots before polls close at 6:00pm local time.

The campaigns have been largely marred by  unprecedented political violence.

This follows years of peaceful transitions of power.

Both of their campaigns have been marred by violence.

For the first time, a candidate must win more than 50 percent of the vote or face a runoff election.

The vote comes against the backdrop of lethargic growth as weak commodity prices have hit Africa’s second biggest copper producer.

Lungu and Hichilema, have both said they are confident of outright victory.

Supporters of Lungu’s ruling Patriotic Front and Hichilema’s United Party for National Development have clashed in the run-up to the poll, forcing the electoral commission to suspend campaigning at one point.