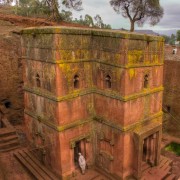 Fast-growing Ethiopia, long committed to driving its economy with state investment, has invited foreigners to invest in its state-owned shipping and logistics company. Other coveted sectors usually off limits to foreigners — like telecommunications and banks — weren’t mentioned in the solicitation, Reuters reported.

Foreign investment has been rising from the ground up in Ethiopia, including flower farms and products like wine and apparel for export and manufacturing.

Some foreign-owned firms were vandalized in 2016 during protests that turned violent over government plans to expand the capital. A six-month state of emergency imposed in October has restored some calm to the country, the government said.

A few companies left. Others put plans to expand on hold. Government promises of compensation for the damage have been extremely slow to materialize, adding to investors’ wariness, Financial Times reported.

Ethiopia plans to let foreign firms own stakes in some state-owned companies, “not because of a shortage of finances, but because we want to modernize the system itself,” Prime Minister Hailemariam Desalegn said Monday at a news conference in Addis Ababa.

Desalegn did not say how much investment is needed, or what other sectors need money besides shipping and logistics.

“We are trying to privatize some equity of some of the companies we have,” he said. “When foreign companies get into these kinds of companies, they will obviously bring technologies, know-how and managerial capability.”

4 advantages of sending employees on international assignments
Scroll to top