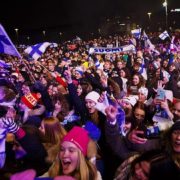 Finland is the world’s happiest country, according to the 2018 World Happiness Report, an annual survey published by the U.N Sustainable Development Solutions Network.

The report ranked 156 countries according to their scores in GDP per capita, social support, healthy life expectancy, social freedom, generosity, and absence of corruption.

All of the Nordic countries took a spot in the top 10, and regularly rank highly among the best places to live in the world. All Nordic countries scored the highest in all the “well-being” categories: income, healthy life expectancy, social support, freedom, and trust, and generosity.

Other surveys had previously voted Finland as being the safest, most stable, and best-governed country in the world.

The only non-European countries to make the top-10 list were Canada, New Zealand, and Australia.

For the first time, the report ranked the happiness of foreign-born immigrants in 117 countries, with Finland scoring double-gold as “home to the world’s happiest immigrants”. Denmark, Norway, and Iceland all followed suit.

South Africa ranked in 105th place. Burundi, in Central Africa, came last in the ranking. Latvia and Bulgaria were among the countries that best improved their scores this year.

According to the survey, the top 10 happiest countries in 2018 are:

Business Etiquette Around the World
Scroll to top