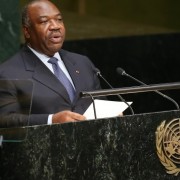 LIBREVILLE Gabon President Ali Bongo Ondimba has warned of possible unrest during the August 27 election which he said was the “strategy” of the opposition challenging his eligibility to seek a second seven-year term.

“It is to be feared, because it is the opposition’s strategy for many years,” Bongo said in an interview with the weekly “Jeune Afrique” published Sunday which asked him if he feared “abuses and even violence” after the vote.

The opposition “has started to heat things up by announcing that the election will not be transparent, that we will steal victory,” the president said.

Bongo described as “nonsense” the arguments of critics who have opposed his re-election on the grounds that he was a Nigerian who was adopted in the 1960s by his father, long-ruling former president Ali Bongo, and was therefore ineligible as a foreigner under the constitution.

Vodacom to expand video service in Africa
Scroll to top