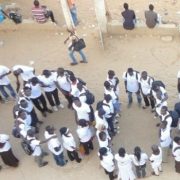 There are tens of thousands of unfilled software jobs in Africa, a continent plagued by mass unemployment, especially among its digitally savvy youth.

Digital skills training is vital to Africa’s future, says the co-founder of CodeX, one of many companies across the continent trying to address the shortfall.

Africa is outsourcing great tech jobs to skilled workers on other continents. Many of the continent’s challenges can be solved with tech solutions, but ultimately they must be solved by the people who understand the problems intimately — Africans themselves.

Africa is undergoing a technological revolution, with major advancements in the tech space transforming labor markets.

Yet, worryingly, there is a shortage of skills in the STEM spaces — science, technology, engineering and mathematics — that means many Africans will remain locked out of this growth, with newly created jobs going by default to better-trained individuals from overseas.

The World Economic Forum’s Future of Jobs study says over 5 million jobs will be lost in 15 developed and emerging economies, including South Africa, and adds that these patterns may be even more aggravated in other African economies.

Skill demands from employers are changing rapidly, and education needs to be aligned with these demands if qualified Africans are to fill these new roles.

This is a process that is happening slowly. Less than 10 percent of Africans get any education after high school, and only a tiny fraction of those who do study in STEM fields. Rural populations are still locked out of tertiary education, and women are still excluded in the tech space.

The whole of Africa is lagging in this regard. Mauritius ranks highest in Africa — in 55th position — for preparedness to use ICT to boost competitiveness and well-being, according to the World Economic Forum’s Global Information Technology Report. The continent has a way to go.

“There are tens of thousands of unfilled software jobs, on a continent plagued by mass unemployment, especially of the digitally savvy youth. Digital skills training is absolutely vital to Africa’s future,” says Elizabeth Gould, co-founder and director of South African company codeX.