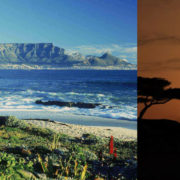 Some facts you perhaps did not know about South Africa (officially the Republic of South Africa, and located at the southern tip of Africa)

1. When you first meet someone, how do you greet them?
Men and women generally shake hands. Friends hug and kiss.

2. What languages are spoken in your country?
South Africa has 11 official languages: English, Zulu, Afrikaans, Xhosa, Swati, Tswana, Southern Sotho, Northern Sotho, Tsonga, Venda, and Ndebele
About South African English on a lighter note:
South African English has a flavour all its own, borrowing freely from Afrikaans, which is similar to Dutch and Flemish, as well as from the country’s many African languages. Some words come from colonial-era Malay and Portuguese immigrants.
Here are some examples:
bakgat: [buck-ghut] Well done, cool, awesome.
bakkie: [buck-ee] A pick-up truck.
boerewors: A type of sausage that originated in South Africa. The name is derived from the Afrikaans words boer (farmer) and wors (sausage).
born-frees: South Africans who were born into a democratic South Africa – that is, after 1994.
braai: [br-eye] An outdoor barbecue, where meat such as steak, chicken, and boerewors are cooked, served with pap and bredie.
bru: [brew] A term of affection, shortened from Afrikaans broer, meaning “brother”. An example would be, “Hey, my bru, howzit?”
chill bru: Relax, my mate. Take it easy.
eish: [aysh] Used to express surprise, wonder, frustration or outrage: “Eish! That cut was eina!”
gogo: [goh-goh] Grandmother or elderly woman, from isiZulu.
gogga, goggo: [gho-gha or gho-gho] Insect, bug. From the Khoikhoi xo-xon.
howzit: A traditional South African greeting that translates roughly as “How are you?”, “How are things?”, or simply “Hello”.
Jozi: [jo-zee] The city of Johannesburg, South Africa’s largest city, which is also known as Joburg, Joeys, and Egoli (the city of gold).
just now: If a South African tells you they will do something “just now”, they mean they’ll do it in the near future – not immediately, as in, “I’ll do the dishes just now.”
now-now: Shortly, in a bit, as in, “I’ll be there now-now.”
lekker: [lekk-irr with a rolling r] Nice, good, great, cool or tasty.
sharp or sharp-sharp: Good, fine, okay, great.
shebeen: A township tavern, illegal under the apartheid regime, often set up in a private house and frequented by black South Africans. The word is originally Gaelic.
takkies: Running shoes or sneakers. “Fat takkies” are extra- wide tyres.
tsotsi: A gangster, hoodlum or thug – and the title of South Africa’s first Oscar-winning movie.
voetsek: [foot-sak] Go away, buzz off.

3. Do you use a twelve-hour clock, or a twenty-four hour clock?
We tend to use both completely arbitrarily

4. What side of the road do people drive on? What do we need to know about driving in South Africa?
We drive on the left-hand side of the road. Road infrastructure is mostly good, and drivers tend to generally stick to the rules, but first-time visitors beware – our minibus taxis have a mind of their own, and their own set of rules, which basically means that they do exactly as they please.
Note that the South African word for traffic lights is robots.

5. How important is punctuality?
Don’t be late! In fact, try to arrive to an appointment five minutes early. South Africans are punctual and being late is considered rude (though this may not always ring true with the Capetonians, who have their own ideas on time-keeping).

6. Which types of music are popular? Who are some of your most popular musicians?
South Africa has a vast range of music including Miriam Makeba, Johnny Clegg, Freshlyground, The Parlotones, Just Jinjer, Eden and Goldfish to name but a few.
Kwaito is a music genre that emerged in Johannesburg, South Africa, during the 1990s. It is a variant of house music featuring the use of African sounds and samples.

and Freshlyground with ‘Doo Be Doo’

and Bright Blue with Weeping

7. Are there any Traditional Dances?
Yes, there are many. Some examples are:
The Zulu Reed Dance – watching thousands of young girls attired in traditional Zulu dress sing, dance and celebrate their culture is a powerful and moving experience.
Volkspele – a South African folk dance tradition. The dress originated from the formal dress the pioneers or Voortrekkers wore.
And watch this video to see some traditional Setswana and Gumboot Dancing:

8. What traditional Festivals are celebrated in your community?
Due to our cultural diversity and different regional areas we have many food, art, craft, music and cultural festivals taking place all over South Africa every year. One of the oldest and most colourful is the Kaapse Klopse (also known as Tweede Nuwejaar – Second New Year) traditionally celebrated in Cape Town on the second of January. Watch this to get a little taste of it.

9. What are your seasons like?
South Africa is famous for its sunshine. It’s a relatively dry country, with an average annual rainfall of about 464mm (compared to a world average of about 860mm). While the Western Cape gets most of its rainfall in winter, the rest of the country is generally a summer-rainfall region. In summer, temperatures can reach as high as 45° C in some places, and in winter, as low as -13° C.

10. Tell us an interesting fact about your President?
Jacob Gedleyihlekisa Zuma, GCB (born 12 April 1942) is the President of South Africa, elected by parliament following his party’s victory in the 2009 general election. He was reelected in the 2014 election. His father was a policeman who died when Zuma was young, and his mother was a domestic worker. He received no formal schooling. Mr Zuma has been married six times, and has four current wives, and an estimated 20 children.

11. What are South Africa’s major industries?
Among the key sectors that contribute to the gross domestic product and keep the economic engine running are manufacturing, retail, financial services, communications, mining, agriculture and tourism.

12. How do people spend their free time?
Socialising around the ‘braai’, watching or playing rugby, soccer or cricket, going to the beach, eating out, enjoying sports of all kinds.
Our national sports teams are the Springboks (rugby), Bafana-Bafana (soccer), and the Proteas (cricket).
Many South Africans are sports fanatics (regardless of whether actually participating or just spectating), and we also host many international sporting events such as The Comrades and Two Oceans Marathons, and the Cape Town Cycle Tour (formerly known as the ‘Cape Argus’).

13. What do people drink?
Beer, wine, and brandy and coke (very popular with all locals)
Traditional beer was brewed from local grains, especially sorghum. Beer was traditionally so prized that it became central to many ceremonies, like betrothals and weddings, in which one family ceremoniously offered beer to the other family.
Umqombothi, from the Xhosa language, is a traditional beer made in the Transkei, from maize (corn), maize malt, sorghum malt, yeast and water.
Mageu is a traditional South African non-alcoholic drink, popular among many of the Nguni people, made from fermented mealie pap. Home production is still widely practiced, but the drink is also available at many supermarkets.
Rooibos Tea: [roy-borss] Afrikaans for red bush, this popular South African tea made from the Cyclopia genistoides bush is gaining worldwide popularity for its health benefits.
Amarula is a cream liqueur from South Africa. It is made with sugar, cream and the fruit of the African marula tree which is also locally called the Elephant tree or the Marriage Tree

14. What is a popular local dish?
There are too many to name only one – here are some of our traditional foods:
Bobotie: {buh-boor-tee] A dish of Malay origin, made with minced meat and spices, and topped with an egg sauce.
Boerewors: [boor-uh-vors] Literally, “farmer’s sausage”. A savoury sausage developed by the Boers – today’s Afrikaners – some 200 years ago, boerewors is South African food at its most traditional.
Biltong: [bill-tong] This South African favourite is dried and salted meat, similar to beef jerky, although it can be made from ostrich, kudu or any other red meat.
Bunny chow: Delicious and cheap food on the go, bunny chow is curry served in a hollowed-out half-loaf of bread, generally sold in greasy-spoon cafés.
Droëwors: [droo-uh-vors] Dried boerewors, similar to biltong.
Koeksister: [kook-sister] A traditional Malay and now also Afrikaner sweet, made from twisted yeast dough, deep fried and dipped in syrup. The word comes from the Dutch koek (“cake”) and sissen, meaning “to sizzle”.
Malva Pudding: is a sweet pudding of Cape Dutch origin. It contains apricot jam and has a spongy caramelized texture. A cream sauce is often poured over it while it is hot, and it is usually served hot with custard and/or ice-cream.
Melktert: which means “milk tart” in Afrikaans, is a South African dessert consisting of a sweet pastry crust containing a creamy filling made from milk, flour, sugar and eggs.
Pap: [pup] The staple food of South Africa, a porridge made from mealie meal (maize meal) cooked with water and salt to a fairly stiff consistency, stywepap being the stiffest.
Samoosa: [suh-moo-suh] A small, spicy, triangular-shaped pie deep-fried in oil. Originally made by the Indian and Malay communities, samoosas – known as samosas in Britain – are popular with all South Africans.
Vetkoek: [fet-cook] “Fat cake” in Afrikaans, vetkoek is a doughnut-sized bread roll made from deep-fried yeast dough. Mainly served with a savoury mince filling, it is artery-clogging and delicious.

16. General Safety?
Unfortunately, due to the extreme divides between poverty and wealth and rising unemployment figures, crime is very much a fact of life in South Africa and one has to be vigilant and aware at all times and take safety precautions wherever possible.