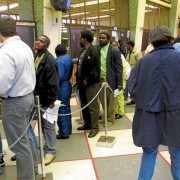 Johannesburg – More than 170 women have filled out a form in the past week indicating the Department of Home Affairs had changed their surnames against their will after they got married.

A petition was set up after journalist Sarah Emily Wild took to social media when she found out during the municipal elections her surname had been changed to her husband’s.

Wild, along with the Legal Resources Centre (LRC), set up a questionnaire for women in the same position.

They hope to take the matter to the Equality Court.

Wild said she was angry that her choice – to keep her own name – had been ignored.

“The reason I’m having this fight is because they changed my name against my will. I gave Home Affairs an instruction and they chose to ignore it,” Wild said.

She said despite Home Affairs spokesperson Mayihlome Tshwete telling a radio station the department would contact her to resolve the issue, she was still waiting to hear from them.