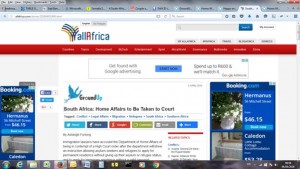 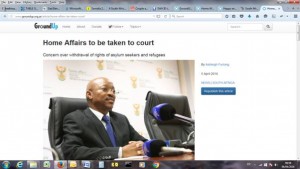 to advise all immigration officials thatDepartmental Circular No. 10 of 2008 has fallen away since the 26th of May 2014 and is hereby officially withdrawn. All applications for change of status from asylum seeker permit to temporary residence visa which are still pending in the system should be processed as per this directive regardless of the date of application”.

Apleni’s directive comes in spite of a 2003 Western Cape High Court order. In the matter of Dabone and others vs the Minister of Home Affairs, the court instructed that asylum seekers and refugees should be able to apply for temporary residence permits and permanent residence without having to cancel their asylum seeker status or give up their refugee status.
Another important provision of the court order was that asylum seekers or refugees do not need to be in possession of a valid passport for their temporary residence permits to be processed or issued.
FIPSA said the Department’s new directive was “breaking the law” by deviating from the court order.
“The Dabone Judgement is in fact a consent order of court which means that as parties to the agreement the Department of Home Affairs have agreed to it and that it is binding. As such it cannot be appealed to a higher court and any deviation thereto constitutes a contempt of court,” said FIPSA.
FIPSA also said that VFS, which is the company that processes visa documents, had stopped accepting applications for temporary or permanent residence from refugees or asylum seekers.
FIPSA and other interested parties are to take the Department to court on 21 April 2016, with Tashriq Ahmed representing them. FIPSA told GroundUp that the Department had said it would defend the matter. “But it is a consent order, so it is inconceivable what defence they can mount. As we have seen before, Home Affairs have a pattern of just appealing matters to frustrate clients as justice is expensive, in the hope clients will run out of money.”
FIPSA said asylum seekers and refugees were vulnerable and few organisations took up their battle to win their rights under the constitution.
The Department’s spokesperson promised on Friday to respond to questions but has not yet done so.

Africa is Ripe for Entrepreneurship Despite Challenges
Scroll to top