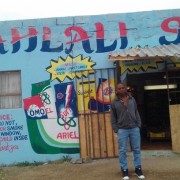 Immigrant business owners in a Port Elizabeth township, KwaDwesi Extension, complain that the police are not doing enough to stop criminals who rob their shops.

On Tuesday a shop was emptied by looters in a xenophobic incident. The violence was sparked by a group of disgruntled residents who accused the ANC ward 36 councillor of not developing their area. The residents then turned their anger on immigrant-owned shops and looted them.

Jilalau Bonger has a spaza shop in Nzo street. “I opened this shop last year in August. From that time I’ve been robbed four times. During the third robbery my brother chased the car the criminals were driving and took the number plates. One community member also recorded the number plates. It  was also later discovered that the criminals were known to the community but with all the information supplied to the police they never even gave us feedback on the cases,” said the 32-year-old Ethiopian.

PwC strategist: How to bridge the gap between strategy and execution
Scroll to top