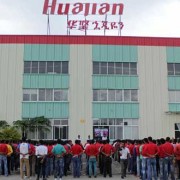 There’s a pretty good chance that some of the clothes you’re wearing, the shoes on your feet and even the device you’re using to read this were made in China. Even as its economy slows, China remains the world’s factory, churning out billions of dollars every year of goods. The government, though, wants to change this which could be a huge opportunity for countries like Ethiopia and Africa as a whole.

As China transitions its economy from manufacturing to services, 85 million jobs will be up for grabs as a lot of that industrial production looks for a new home. Ethiopia, for its part, is aggressively positioning itself as a destination for some of that Chinese manufacturing.

Ethiopia, and Africa in general, may be a tough sale for manufacturers who are always looking to keep costs as low as possible. Compared to regions like Southeast Asia, where most of the outbound Chinese manufacturing is going, Ethiopia’s infrastructure is less developed, its work force is less educated and its supply chain networks are not as a robust.