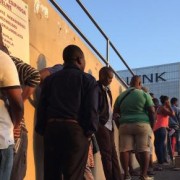 Durban – People are afraid to go to Home Affairs in Pinetown because of criminal elements lurking outside it, owing to the “lack of security”.

The Mercury was inundated with letters, published in Thursday’s newspaper, in the wake of a report of businessman Visvin Reddy’s stabbing outside the premises on Monday.

Reddy was looking for parking across the road from the offices when he was attacked in his car. He was stabbed twice and needed stitches.

But the KwaZulu-Natal Department of Home Affairs distanced itself from the situation on Thursday, asserting that crime in the vicinity of Home Affairs was not department’s problem.

Readers complained of muggings and hijacking attempts from criminal gangs, which they said preyed on visitors to Home Affairs.

“Not a day goes by when someone is not accosted, mugged or stabbed and children are left traumatised outside Pinetown Home Affairs”, wrote a reader, who said attacks were regularly reported on a community Facebook group.

“It would appear that one or two gangs of young men are deeming visitors to Home Affairs soft targets. These incidents are reported to the SAPS, but nothing… is being done.”

The SAPS called that claim “baseless” on Thursday, saying Pinetown had “visible policing and tactical response members” deployed on a 24-hour basis.