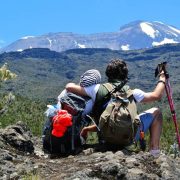 There are plenty of wrong ways to climb Kilimanjaro – wrong shoes, wrong backpack or wearing a full evening dress, perhaps. But the right way to climb it will depend on how fit you are, what your preferences are and how you like your challenges.

Let’s take a look at the routes and you’ll be clearer about which route is best for you.

The Marangu Route is an old favourite. It’s the most well-established route and used to be the most popular because the slopes are more gentle and easier to climb. It’s also called the Coca-Cola route because if you can drink a can of cola then you can climb this route. Or because it makes you gassy. We’re not sure.

However, in the recent years Marangu Route has been kicked into second place by the more popular Machame Route – more of this in a minute!

It’s the easiest – its slopes are the gentlest of all the routes so it’s great for a beginner or if you’re a little out of shape.
It’s the cheapest and fastest. It’ll take you five or six days to the summit.
It is the only route with hut accommodation in a dormitory style, so you won’t need camping equipment.
It’s a less busy route because there are a limited number of beds in the huts, so only a certain number of climbers are allowed per day.
Marangu Route disadvantages:

The climb is gentle but it’s rapid, which means acclimatisation could be a problem. We recommend an extra day to make sure you give yourself a good chance of making it to the top. “Pole, pole” (slowly, slowly) is Kilimanjaro’s motto, and you’ll need to take it slow. An extra day will cost a little more, which is not great for those on a budget.
Because it’s a quick route, with less time for acclimatisation, the success rate of making to the summit is lower than on the longer routes.
The route is there and back, which means the scenery, although as magnificent as you’d expect, will be the same on the way back as on the ascent.

The magic of Zanzibar
Scroll to top