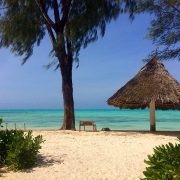 East Africa has an irrepressible allure, and I’ve become addicted to its vibrant kangas (patterned fabric), its friendly people and its crystal clear waters. So, in order to get my next Kiswahili fix, we headed to Unguja Island – more commonly known as Zanzibar – which is just a two-hour ferry ride from the Tanzanian coastal capital of Dar es Salaam, or a direct flight from many African cities.

Thanks to its close proximity and budget airline options, the largest island in the Zanzibar Archipelago is an easily accessible and relatively affordable idyll where South African residents with itchy feet can spend their crashing currency. And with a week’s prescription of sun, sea, sand and Stone Town tucked between the pages of my passport, a holiday in Zanzibar proved to be just what the doctor ordered to take the edge off my East African cravings.

Our first stop was Stone Town – the historical part of Zanzibar City and a UNESCO World Heritage Site, which lies 10 minutes from the international airport on a western headland that protrudes into the Indian Ocean.

Stone Town has all the accoutrements of a magician, whereby the distractions of noise and charm mask its subtle changes to amaze and astound the amateur. It is a hypnotist by whose acquaintance you allow yourself to be harmlessly deceived as you wander beguiled under its spell; submitting to its whims at every indiscernible turn.

Its smoke and mirrors are a labyrinth of coralline ragstone and mangrove timber architecture, and its urban fabric tells the tale of the town’s former life as a Swahili trading port. The now crumbling buildings were once moulded under the influence of disparate cultures from Asia to Europe, and its notorious history as East Africa’s main slave market remains imprisoned in the foundations.