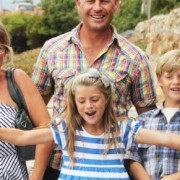 A FISH Hoek woman, born in Denmark but married to a South African, fears police might deport her because the Department of Home Affairs bungled her application for permanent residency.

Mitte Kirsten has lived in South Africa for five years after relocating from Denmark with her husband and two children in 2011.

ON EDGE: Mitte Kirsten, with her husband Lloyd and their children Lola and Pablo, in Fish Hoek. A bungle by Home Affairs officials in Barrack Street has made her fear being wrongfully deported. Credit: supplied

She arrived in South Africa on a tourist visa in 2011 and then applied for a spousal  visa, while at the same time seeking permanent residence. Her latest visa expired on May 15, 2015.

Two weeks ago her application for permanent residency was rejected by the Department of Home Affairs in Pretoria due to an incomplete “good cause letter”, which should have been filed by Home Affairs officials dealing with her application at the department’s Barrack Street branch.