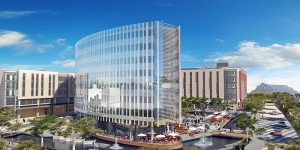 The Century City Conference Centre and Hotel is now open and has the capacity to accommodate close to 2 000 guests in 19 venues. The new centre has already secured 75 conference bookings for the year ahead. The hotel adjacent to the centre has expanded from 125 rooms to 600. Century City Conference Centre’s joint CEOs, Glyn Taylor and Gary Koetser, said on Monday that the centre was a great new asset to the hospitality industry and a perfect opportunity to increase the number of business travellers to South Africa and Cape Town.

Speaking at the opening of the conference centre at the weekend, Western Cape Economic Opportunities MEC, Alan Winde, said the province had already secured conference bids worth almost R2bn in the current financial year. He said just two of these conferences — the World Ophthalmology Congress 2020 and the International Fiscal Association 2022 — would bring 5 600 delegates and generate R262 million (€14 million) for the provincial economy.

7 Top Reasons Why Africa Is Still Poor, 2016
Scroll to top