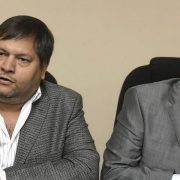 Two of South Africa’s wealthiest families are going head to head in a battle over who will control a seven-star international airport terminal in Johannesburg reserved for the ultra-rich and famous.

The Oppenheimers claimed in court papers served on Home Affairs Minister Malusi Gigaba this week that the Guptas tried to use their influence over Denel to hijack the project.

The papers detail how two former Gupta pilots claimed the family had allegedly tried to wrest control of the terminal from the Oppenheimers.

Fireblade, the Oppenheimer family’s aviation company, built the terminal on premises leased from Denel. It opened for domestic flights in 2014, but has not yet been granted international rights.

The Oppenheimers intended to serve international flights, which can make the terminal profitable.

They want local and foreign dignitaries, as well as celebrities, to land and be whisked through immigration and customs in minutes, without the hassle of going through OR Tambo International Airport, while their jets are being parked in Fireblade’s hangars.