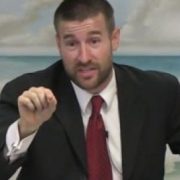 The minister made the announcement during a media briefing at Parliament this morning.

In his address, Gigaba said: “South Africa has to work towards reaching its constitutional goals … It is a constitutional imperative for organs of state and society at large to protect and jealously defend the rights of all people.”

Gigaba added that the Immigration Act of 2002 “prohibits the admission of foreigners likely to promote hate speech or advocate social violence”.

Anderson is known for being virulently homophobic – his comment about the Orlando Massacre (“The good news is that there’s 50 less paedophiles in this world”) caused particular outcry from LGBTI and human rights activists.

On Monday September 5, the minister had met with representatives of LGBTI organisations who collected 60 000 signatures in support of blocking Anderson’s upcoming scheduled visit to South Africa.

A task team, made of representatives of South African LGBTI organisations and department officials, was set up during this meeting.

Where are the jobs?
Scroll to top